Here are Dr. Krause's 2014 Preakness picks. This is a very weak field with only a few Derby horses making the trip to Baltimore’s Pimlico race track. Nevertheless, this might provide some interesting betting opportunities....

Best of the Field: #3 California Chrome (3-5 odds). This was my Derby pick and he did not disappoint, running a near perfect race in Louisville. While California Chrome won the Derby with a slow time; he did run strongly down the stretch, opening up on the other horses and coasting to the win. With only two weeks between the Derby and Preakness, he still appears to have plenty of gas in the tank.  He is the obvious favorite and the poor betting odds indicate this.  I’d avoid a straight WPS bet, but I believe he should be included in your exotics. He sure looks like the winner, but this is horse racing and bad luck or another horse coming out of nowhere could produce a huge upset. 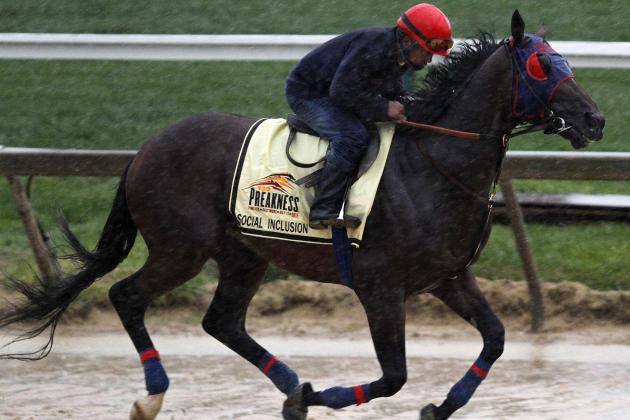 Value Horse: #8 Social Inclusion (5-1 odds). Social Inclusion missed running in the Derby, so this is the race that his owners and  85-year-old trainer, Manny Azpurua, have been targeting. Luis Contreras is a good jockey who has been aboard in all three of Social Inclusion’s starts, this horse has good speed and the ability to run just off the pace of the early speed horses.  Very lightly raced, he is rested and has a good opportunity to catch California Chrome down the stretch. This is a good WPS bet.

Long Shot: #7 Kid Cruz (20:1 odds). Like the Miami Heat, this horse is a closer. Earlier in the year at New York’s Aqueduct, where it was freezing, Kid Cruz made up ten lengths in the stretch – and has been a strong closer throughout the spring. While he’s a long-shot, he has showed continual improvement. If the pace is slow, as it was in the Derby, then Kid Cruz could come out of nowhere. He’s worth a WPS and looks good look underneath California Chrome and Social Inclusion in your exotic wagers.

Students: If you’re considering a career in investment, the pressure to stand out from your peers has never been higher. On Thursday 15th May, CFA Institute will livestream their ‘Discover a Career in Finance’ event around the world, for students across all regions to find out more about the investment industry and how to pursue a career within it as well as hear from industry experts on how you can be successful.


This Thursday, 15 May 2014, CFA Institute will hosts their “Discover a Career in Finance Open Day” online for students around the world. Register now at: http://bit.ly/1eEoPfF  or http://www.efinancialcareers-recruiter.com/cfa2014/
Graduate recruiters including companies such as Credit Suisse, Swiss & Global Asset Management, GAM and PICTET will be on hand to tackle your questions and offer advice to help you through the recruitment process. CFA Institute will invite some of its members and exam candidates to offer an insight into their roles in the investment industry, and they can take your questions about their career path.

Paul Zandt experienced a severe heart attack and died unexpectedly on May 8, 2014, at the age of 50. Paul was the beloved husband of Joan (nee Cortichiato) for 27 years and the devoted father of Matthew, Daniel, and Ryan.

Paul graduated from Marquette University with a Masters of Business Administration in 2006 and was an essential member of the inaugural Applied Investment Management (AIM) class. Paul obtained his Bachelors of Science degree in Meteorology from the University of Wisconsin-Madison in 1986.

He was an on-air meteorologist with WTMJ-TV4 and AM-620 WTMJ radio from 1993 – 2004. Paul provided on-air weather reports for morning and evening television and radio newscasts.  He also authored a weather column for the Milwaukee Journal/Sentinel and developed and presented weather seminars for area schools and community groups.

While in the AIM program at Marquette, Paul worked as an intern and upon graduation went to work for Cleary Gull in Milwaukee. He served as a portfolio analyst and client advisor. Paul conducted asset allocation and Monte Carlo analysis for institutional and high net worth clients; performed research and due diligence on equity/fixed income mutual funds; and provided performance commentary.

In March 2010, Paul was awarded his Chartered Financial Analyst certification. He also was a volunteer presenter with Make a Difference – Wisconsin since May 2009. He delivered financial education programs to area high school students.

In January 2014, Paul joined SJA Financial Advisory in Menomonee Falls as a portfolio manager. He was responsible for creating, implementing and maintaining investment portfolios; monitoring portfolio allocations; and researching and recommending investment options for clients.

Paul was a member of the popular Milwaukee-area cover band, Pulse. He performed keyboards and sang vocals for the group. Paul was trained on classical music and began playing jazz and rock when he was in his teens.  After ending his career as a TV weatherman and moving into finance, he returned to music and played in local bands that included the Itch, Second Wave and Jackie Brown and the Boys.

An intelligent, accomplished and thoughtful individual, we mourn the loss of Paul Zandt. He was a joy to be around and the world is a better place because of him.

A gathering to honor Paul will be held at Holy Apostles Catholic Parish (16000 W. National Ave., New Berlin) on Friday, May 16; from 12:30-4:30 pm with a Mass of Christian Burial at 4:30 pm. Memorials to the family for his children's education are appreciated.

Back again for the fourth year, here are Dr. David Krause's Kentucky Derby picks. This is a weak field with many promising colts sidelined with injuries. Nevertheless, this is the most exciting thoroughbred racing event of the year. So party on....

Best of the Field: California Chrome (5-2 odds). This California-bred speed horse in the class of the field (note: it has been over 50 years since a California horse has won the Derby). Don't be fooled because his trainer (Art Sherman) is 77 years old - this is a beautiful and talented horse and skilled jockey (Victor Espinoza). CC will get out front early and run away - especially from the 5 post - and the large 20 horse field will make it difficult for a stalker to come through the pack. This will be the betting favorite on Saturday so the odds will not provide a big payout, but include him in exotics and you can have a good payday.

Value Horse: Danza (10-1 odds). If it is possible for a horse to come from behind, Danza will be the one that can do it. Winner of the Arkansas Derby, with Joe Bravo at the reins and trained by Todd Pletcher, this is colt that might be on a hot streak similar to California Chrome. A 5 length winner (as a 40-1 long shot) in the Arkansas Derby, this lightly raced horse might be wearing the roses come late Saturday afternoon. The #4 post is a good draw and if Bravo can keep Danza in mid-pack for much of the race, this could be the horse that closes down the stretch.

Long Shot: Candy Boy (20:1 odds). Another California-bred horse, Candy Boy has one of the best jockeys in the business - Gary Stevens. According to the Kentucky rail-birds, Candy Boy has looked as good this week as any horse in the field. This is another horse that can come from behind to surprise the experts. Steven, who has won 9 triple crown races in his career, is 51 years old and still capable of leading this talented colt in the front. The #18 post will be a challenge; however, in past Derby's this has not been a big issue.

Betting: Pairing up the three horse above into an Exacta box could be a nice play or taking Danza or Candy Box in a WPS bet might provide a decent ROI. In any case, bet responsibly and enjoy the Kentucky Derby!
Posted by AIM Program at 7:33 AM 27 comments: