Add KFC Canada to the list of companies that is looking to capitalize on the frenzied interest in cryptocurrencies
KFC Canada, the fast-food retailer, offered to accept Bitcoins as payment for a $20 meal in a bucket last Thursday, only for a limited time. For a paltry 0.001156 bitcoin you got fried chicken - and sides.  Sound good? Well, the thought of using your bitcoin right now to buy chicken is moot - since the Bitcoin Bucket sold out on KFC's website in less than 30 minutes last Friday. 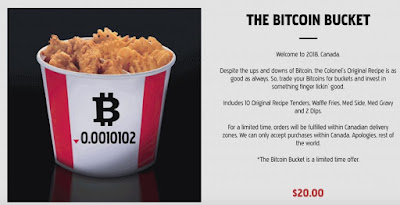 Motherboard pointed out it might not be the wisest idea to blow your Bitcoin stash on fast food:


The cryptocurrency is already accepted by a range of major companies including Microsoft, Expedia.com, Overstock.com, as well as at a number of fast-food franchises globally.
Like it or not --- cryptocurrencies are here! 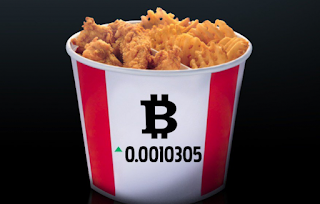