An International Equity holding: Medtronic Plc (MDT, $113.70): “Where to next for Medtronic?” by: Ryan Witt, AIM Student at Marquette University

• MDT saw 53% of its FY21 Q2 revenues come from the US, while the company also operates in more than 150 countries.

• Geoffrey S. Martha was named CEO as of April 27, 2020 following the 9 year run of Omar Ishrak as CEO, who now is the current Executive Chairman of the Board.

MDT has started the restructuring to change their organizational structure with a new simplified model which is expected to save them $450 -$475 million by FY23. Martha has said he wants to turn the current operating groups and transition them into very focused operating units. Doing so will allow MDT to give each operating unit more control over their specific segment and allow them to be accountable for their own specified unit.

Martha is hoping to form 20 operating units from the larger overall company. These operating units would be separated under the four different segments. By doing this Martha believes that MDT will be able to obtain organic sales growth of 5%-plus for the long-term by reorganizing the company. There is some skepticism with this as the company has not been able to hit 5%-plus in the past few years.

With MDT being the largest player in the medical technology market and having a constantly expanding product line with numerous products from its pipeline, it has been seen that since the start of 2020 MDT has had over 180 product approvals in key geographic regions. This will continue to grow as MDT expands into new business segments and through their acquisitions. MDT has completed seven acquisitions in 2020 for a combined $1.6 billion furthering their expansion into AI, machine learning, and predicative analytics.

MDT has increased its dividend for every fiscal year going back 43 years. They are on similar path to do so this year coming out to annual dividend per share of $2.32 for FY21. An increase of 7.4% from the FY20 which was $2.16 per share. MDT has no plans of scaling back on dividends and plans to increase them in the future as well.

MDT took an initial hit from the coronavirus pandemic, but has seen some bounce with a 3 month change of 5.41%. For November the stock has increased 12.6% on the back of the recent vaccine news that saw the market jump. MDT has paid two dividends of $0.58 per share out to shareholders for FY21 Q1 and Q2. The company still plans on paying the same for Q3 and Q4 despite the pandemic. 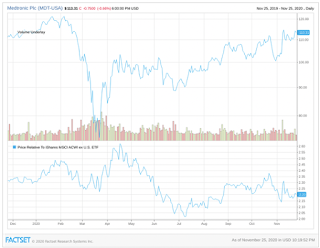 Being one of the biggest players in the Medical technology for years now, MDT certainly has an advantage over the competition with its size and plethora of products. However, the pandemic did recently effect MDT in the final quarters of FY20 and beginning  quarters of FY21. Although I believe that the company is promising for more growth in the future, the uncertainty around the new CEO and his massive restructuring plan for the coming years have me wary of increasing the weight of MDT within the AIM International Equity Fund. For this reason my recommendation would be a hold as I still think there are opportunities for growth down the line, but the skepticism of the bold restructuring of the organization is prevalent. 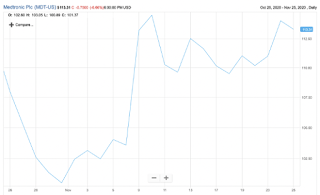 Posted by Marquette AIM at 1:18 PM