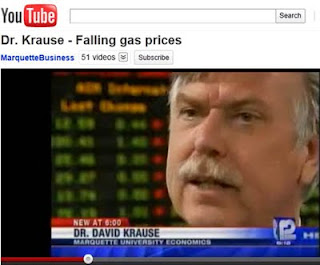 Dr. David Krause, AIM program director, was interviewed by Portia Young of WISN-TV in Milwaukee about the impact of falling commodity prices on Tuesday.
Krause said, “The perceived economic slowdown has caused commodity prices to fall the past week; especially oil prices. Oil dropped to below $80 per barrel on fears of a slowing world economy.” He indicated that a silver lining to the decline in commodity prices was that the consumer might be paying less at the gas pump in the second half of 2011.
To view the interview, which took place in the AIM Room in Marquette's College of Business Administration go to: http://www.youtube.com/watch?v=ryjLxQ3wLS4
Posted by AIM Program at 1:38 PM