Cellectar Biosciences is trying to move from an over-the-counter (OTC) stock to trading on the Nasdaq stock exchange—and the stakes are high for the small Madison, WI-based biotech.

Winning approval to join the Nasdaq stock exchange could give Cellectar a boost in bringing its cancer drugs and imaging products to market—assuming the company can capitalize on the opportunity. And at the very least, Cellectar would raise its profile in both the investment and research communities by moving into the big leagues of a major exchange. 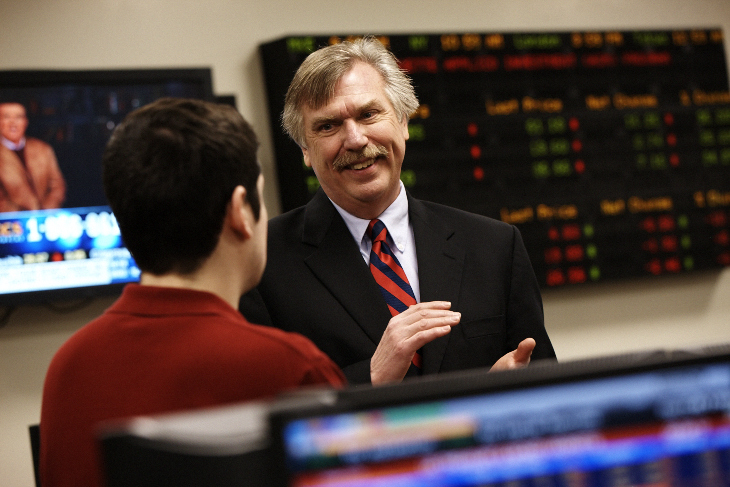 But many OTC stocks can’t be tarred with the same brush as dubious penny stocks, adds Blanchard. (The SEC defines penny stock as securities issued by small firms that trade at less than $5 per share, generally OTC. Others set the threshold at $3 or $1 per share.) Indeed, for many small private companies, which don’t have enough visibility for a splashy IPO on a major exchange, trading their stock OTC is a logical next step for raising capital after the family and friends stage, despite the negative perception, says David Krause, a Marquette University finance professor and director of the Milwaukee school’s Applied Investment Management program. “Not every stock is Google or Apple; they have to start out oftentimes raising money where they can, and it may be in the penny market,” he explains.

Biotech and software startups sometimes go the OTC route because they lack the tangible assets, like industrial manufacturing equipment, that can be used as collateral to more easily obtain financing, he says. Or they can end up as an OTC stock as the result of a merger, as in the case of Cellectar. The once privately-held company was acquired in 2011 by Newton, MA-based Novelos Therapeutics, which was already an OTC stock, and which moved the headquarters of the combined company to Madison, where Cellectar was based.

It’s not the preferred path, Krause says. “Firms would try to avoid it if they could because of the connotation.” He equated it to hawking wares at a pawnshop. “It doesn’t mean you’re a bad person and that the money you’re raising isn’t valid, it’s just not the normal route that people—or in this case, businesses—go to raise money.”

That’s why some ambitious executives view trading OTC as a way station on the path to better things. Making the jump to a major stock exchange opens the business up to more liquidity and a bigger pool of investors, says Matt Rossiter, a corporate partner with Fenwick & West in San Francisco. And given investors’ recently revived interest in biotech companies (although the biotech IPO market might be cooling), now might be a good time for the sector’s startups to try to “up-list” from trading OTC to the Nasdaq—the home of most small, publicly traded biotechs. “It helps because investors are more aware of the sector and more optimistic about its prospects,” Rossiter says.

Cellectar’s executives and investors hope he’s right. The company recently enacted a 1-for-20 reverse stock split and announced it had applied to trade on the Nasdaq Capital Market, while also planning a public offering of additional shares. The firm awaits approval by the Nasdaq, which depends on a set of criteria that include having a bid price of at least $4 per share, at least 300 shareholders, and at least 1 million publicly held shares, among other requirements. A Cellectar spokeswoman declined to comment, citing a company quiet period while the Nasdaq considers its application. But in mid-July, the company’s stock was trading above $6 per share, and its investors held 2.87 million shares.

The company has disclosed plans to trade on the Nasdaq at least once before,back in July 2011, three months after Novelos acquired it. But the company pulled back until now, when its stock price is higher and the R&D pipeline looks stronger.

“My personal opinion is I’m quite confident that we will succeed this time,” says Wisconsin businessman Jeff Straubel, an early investor in Cellectar. “It has most to do with the fact that I think we are gaining a good deal of acceptance with the right community,” namely scientists. Straubel cited recent buzz among researchers after Cellectar published a study in Science Translational Medicine that showed its compounds were effective in imaging and treating human tumors that had been surgically grafted into mice, and in detecting tumors in a small group of human patients—although a co-author of the study told The Scientist that more clinical work will be required to “optimize the imaging and therapy parameters.”

But the potential of Cellectar’s science won’t affect the outcome of its Nasdaq application, which will likely be decided upon in the next 60 days or so, Marquette University’s Krause estimates. The decision will have a huge impact on the company’s future. Cellectar’s ability to raise additional financing to develop its cancer drugs and imaging agents likely hinges on making it on the Nasdaq exchange, says investor Straubel. Straubel is president and majority owner of Wisconsin-based Greenway Properties, which currently holds nearly 22 percent of Cellectar’s shares, SEC filings show. “These sophisticated, larger biotech investors, especially, only deal with companies which are traded [on a major exchange] and have a good deal of liquidity,” Straubel says. “They just don’t take a company as serious which has a very low liquidity and a very low stock price.”

Cellectar was founded in 2002 by UW-Madison radiology professor Jamey Weichert, who currently serves as chief scientific officer. The company raised more than $23 million in venture capital between 2002 and 2010 to develop compounds from Weichert’s lab called phospholipid ethers (PLEs). Researchers have known for several decades that these PLEs have an unusual and potentially valuable property: The PLEs become trapped inside malignant tumor cells because cancer cells apparently don’t have the ability to metabolize and eliminate the molecules. As a result, PLEs could be used as a vehicle for fluorescent or radioactive material that would help detect and map the locations of cancer cells, or to deliver drugs or sources of radiation to the cancer cells. Such targeted drugs should theoretically cause far less damage to healthy cells than typical cancer drugs do, thus minimizing side effects. Cellectar has created three novel cancer-targeting products that utilize PLEs: one therapeutic compound and two imaging agents that are at various stages of development, from pre-clinical to a Phase II trial.

The product pipeline showed enough promise for Novelos to snatch up Cellectar in 2011, a year after Novelos’ leading cancer drug candidate failed a Phase III trial. Novelos moved to Madison to continue developing Cellectar’s products. The combined company renamed itself Cellectar Biosciences (OTCQX: CLRB) this year and raised $4 million in a private placement offering of convertible debt. The new money will help fund a Phase II trial of its positron emission tomography (PET) imaging compound in glioblastoma, a type of brain or spinal tumor.

If Cellectar does win Nasdaq approval, it won’t be the only small biotech that successfully graduated from the OTC market to a bigger exchange. San Diego-based Halozyme Therapeutics, for example, went from privately held to trading OTC in 2004 when it completed a reverse merger with Global Yacht Services. It later traded on the American Stock Exchange (now the small-cap NYSE MKT), beforejoining the Nasdaq in 2007.
More recently, New York-based Retrophin did a reverse merger in 2012 withshell corporation Desert Gateway, which was traded OTC. Retrophin startedtrading on the Nasdaq in January.

Small OTC biotechs considering a move to a bigger exchange can draw a couple lessons from Retrophin’s strategy, says Blanchard of Covington & Burling. His law firm represented the underwriters in Retrophin’s $40 million public offering, which occurred simultaneously with its application to trade on the Nasdaq Global Market. Conducting a public offering of at least $40 million in tandem with the application provides a fast track to the Nasdaq, Blanchard says.
Another part of the secret to Retrophin’s success, Blanchard says, was a pair of private placement offerings totaling $35 million, which were completed in the months leading up to its Nasdaq IPO. “They sought out some large investors who were really interested in the story,” Blanchard says. “They basically established a devoted shareholder base even before they did their up-listing, which is actually a good way to do it. Then once they did the up-listing, their stock shot straight up.”

Retrophin (NASDAQ: RTRX) priced the $40 million offering at $8.50 per share. It went on to trade as high as $25 per share, Blanchard says. It closed at $10.23 per share on Monday.
So will Cellectar make it to Nasdaq? Although Blanchard didn’t want to comment directly on Cellectar’s prospects, he did say that it appears the company is taking the appropriate steps to win Nasdaq approval. It’s conducting a public offering alongside the Nasdaq application, for instance, and it has already boosted its share price with the 1-for-20 reverse stock split. The latter is especially important because the biggest hurdle to listing on the exchange is typically a company’s stock price, Blanchard says. The higher the better. Cellectar closed at $6.50 per share on Monday.

Besides gaining access to a larger pool of investors, the rewards for making it onto a bigger exchange include increased buzz around the company and a big boost in its credibility, industry observers say.

But it’s not all positive. The flipside is more scrutiny. “When you open up investment to a broader array of people, not just VCs, it’s actually in some ways a bit more stringent because you’ve got more people with more ideas looking at it,” says Les Funtleyder, a former biotech financial analyst who is now a New York-based partner with international healthcare investment advisor BlueCloud Healthcare. “But it does add a certain legitimacy to your company. But I say that with an asterisk because the reality is if the IPO is weak, then as a management team, you have to overcome that. That will raise questions in other public investors’ minds, which can be dealt with if you put up good results.”

Rossiter agreed that moving to the Nasdaq only opens the door to more financing and visibility. Then it’s time to execute.