A current AIM Fund Holding: CalAmp Corp. (CAMP) by Nick Dykema. "AIMing to get back on track in 2017"

• CalAmp Corp. (NASDAQ: CAMP) offers wireless communications solutions for several markets within the communications industry: Machine-to-Machine, communications, Mobile Resource Management, applications, and other emerging applications. The company is split into Wireless DataCom (86%) and Satellite (14%) business segments. In addition, CAMP derives the majority (83%) of their revenues from their United States customer base.
• CAMP’s stock fell 9% following the release of its third quarter 2017 earnings.
• After acquiring LoJack, the company continues to increase its customer base and grow revenue.
• $7.8MM of total inflows from institutional investors during the previous quarter.
• Rick Vitelle, who served as CFO of CalAmp for 16 years, announced he will be retiring, and management is searching for his successor.

Management attributed the dismal third quarter results to “higher than anticipated legal expenses and foreign currency exchange losses.” Relative to the previous year’s third quarter, legal expenses increased by $1.6 million in order to protect the company’s intellectual property. Management believes this number will decrease back to its normal range in the future. Additionally, foreign currency exchange rate losses of $576,000 were associated with LoJack’s international operations.

Despite a harsh macroeconomic environment earlier in the year that decreased demand for the company’s fleet telematics products, CAMP is optimistic about the near future. In the third quarter, Mobile Resource Management telematics products rebounded and reached its highest sales volume in the past four quarters. Third quarter revenues had increased 12% year-over-year and gross margin reached its highest level in CAMP’s history. The company continues to produce top-line growth due to revenue synergies from the LoJack acquisition. The LoJack acquisition is expanding CalAmp’s footprint in Europe and increasing its customer base.

Institutional buying and selling has been a bright spot during the most recent quarter. There were total inflows of $7.8MM from institutional investors in the previous quarter and no outflows. This was a huge shift from the preceding quarter when outflows exceeded inflows. BlackRock Fund Advisors, CAMP’s top shareholder, increased its position by 6.6% during the third quarter. Similarly, several other large investors increased their stake in CAMP.

It should also be noted, Rick Vitelle, CalAmp’s CFO, announced his retirement prior to the third quarter earnings call. Vitelle served as CFO for over 16 years and he will continue working until management finds a qualified successor.

What has the stock done lately?
Since being added to the AIM Equity Fund in early October 2016 at a price of $13.54, CAMP’s stock price has increased 12.4%. Over the last four months, the stock has been as low as $12.18 and as high as $15.91. After investing in CAMP, the stock initially dropped to its four month low, but made a significant rally in the week preceding and weeks following the presidential election. During the stock’s rally, CAMP jumped nearly 27%. The rally ended when CalAmp fell 9% on the day following its third quarter earnings release. Fortunately, CAMP has increased 6.4% since the 9% drop.

Past Year Performance:
Over the last year, CalAmp’s stock price has decreased by 8.6%. The stock has been quite volatile during the past year. In mid-March, CAMP reached $19.48 and has been as low as its November 2 price of $12.18. Both of the last two earnings calls have resulted in significant decreases in the stock’s value. Following the release of its previous two earnings calls, CAMP’s stock plummeted 18% and 9%, respectively. 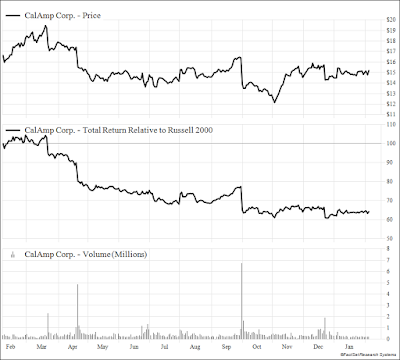 
I believe CalAmp’s integration of LoJack should be closely monitored during the company’s next fiscal quarter. The acquisition closed on March 18, 2016 and CAMP has missed earnings in both of the following quarters. On the other hand, Revenue synergies and margin expansion are beginning to emerge from the acquisition, and continue to surface in the coming months.

Likewise, CalAmp is beginning to penetrate the European and Latin American communications industry, which will provide the company with the potential for even more growth. Moving forward, CalAmp will be a rewarding investment for the AIM Equity Fund as long as the synergies from the LoJack acquisition continue to surface.