·    Standex International Corporation (NYSE:SXI) is a leading manufacturer of a multitude of products and services for diversified commercial and industrial markets. Standex has twelve operating segments that are organized into five reporting segments: Food Service Equipment, Engraving, Engineering Technologies, Electronics, and Hydraulics.

·     SXI has 42 United States patents and 41 trademarks. They are extremely diversified and losing any one of these would not have a significant effect on their performance.

·      Standex is exceling due to the large performance increases in both their Engineering Technologies and Electronics segments. Net sales and income from operations of the Engineering Technologies segment increased by 10.1% and 17.0% respectively yoy. The same can be said for the Electronics space where net sales and income from operations grew by 15.5% and 31.1% yoy.

Key points: Standex International Corporation has soared since being added to the AIM Small Cap Equity Fund in April of 2016. At this time, we purchased SXI for $76.36 per share, and today it is worth $104.40 per share representing a gain of 36.72%.

Standex has seen contract growth in the aviation division of the Engineering Technologies segment. This was a result of Airbus ramping up activity on the A320 CFM engine. Originally, it was believed that they would achieve full volume by the end of FY 2017, but some of these initiatives have been pushed out. It now looks like SXI will reach capacity during the middle of FY 2018, suggesting a strong possibility of higher sales.

SXI has not only been increasing sales in their higher margin business segments, but they are also raising these margins. They have been spending considerably larger sums on capital expenditures in order to increase capacity in their Engraving, Engineered Technologies, and Electronics segments. Immediately after making the strategic acquisition of Standex Electronics Japan, they approved capital expenses to expand machinery and factory capacity.

The most recent acquisition made by SXI is that of Piazza Rosa in Italy. This acquisition allows Standex to widen their potential market considering Piazza’s specialty manufacturing capabilities in polishing, laser welding, laser hardening, laser cladding, and repair and maintenance services. Ultimately, Piazza allows Standex to dip into a new market that they believe will get a jumpstart in FY 2018. Automotive engraving relies on new model introduction, and many believe new introductions are going to be up 30% in FY 2018 compared to FY 2017.

Standex International Corporation has done nothing but climb since June of 2017. In September, the stock hit a monthly period where it went up about $10 per share. Specifically, on September 8, six individuals or asset managers increased their positions in SXI causing the start of that significant price jump. 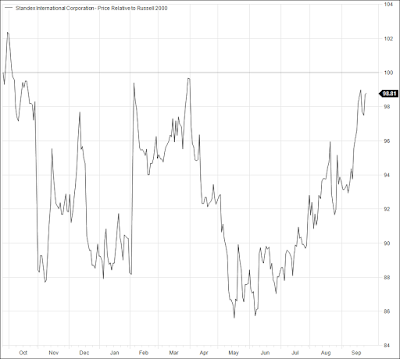 SXI has surpassed its price target of $96.20, but it appears that they still have not found their ceiling. Standex still has growth potential in their Engineering Technologies, Electronics, and Engraving segments. These growth opportunities seem to be at the forefront of SXI’s plans as they have dumped capital expenditures into these specific manufacturing segments and made strategic acquisitions to exploit evolving markets. They have also maintained FCF levels and increased their debt to continue expanding and honing their margins. Based on these factors, it does not appear that Standex International Corporation has reached their peak, and may even have room to soar. 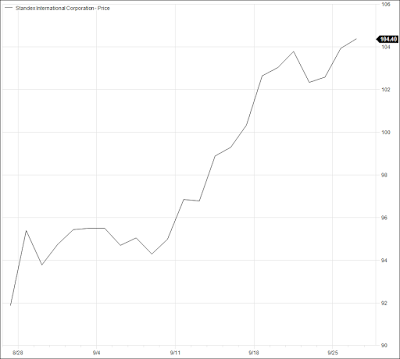 Source: FactSet
Posted by Marquette AIM at 5:33 AM