• FOXF’s Georgia Expansion is on schedule to be completed by the end of the year.

• FOXF’s Executive Chair of the Board of Directors, Larry Enterline, will retire in April 2021 after being with the company for nearly a decade.

Key points: FOXF provides high-end products and is a highly accredited brand having some of the best shocks recommended by others. This reputation creates high demand for FOXF products. This demand has created backlog for the company. The FOXF team has been able to control costs and operations to meet OEM expectations and manage evolving backlog.

In 2018, FOXF announced their expansion into a new facility in Georgia. FOXF is currently transitioning into a 336,000 sq/ft facility to diversify their manufacturing platform. This transition will help FOXF with efficiency in supply chains resulting in improved gross margins. In 2020, the aftermarket shock manufacturing transfer was completed, and the large automotive OEM production lines was commenced and will be complete by the end of Q2 2021. The Georgia expansion remains on schedule to be fully transition by the end of 2021.

There has been a shortage in low-end bikes as consumers are shifting their interests towards better bikes that offer more features than bikes they would have previously owned. This is beneficial for FOXF as there has been an increased demand for their high-end bikes, specifically e-bikes in Europe. Their German facility has allowed the company to meet European customer’s higher demand for e-bikes.

On February 25th, FOXF filed their 8-K and 10-K and hosted their earnings call. The company announced growth within the company’s financials and the retirement of the current Executive Chair of the Board of Directors. Since this release, the price has been at a decline, but is still up about 20% YTD. Also, there was an increase in volume on February 26th. This was due to shares being acquired by the CEO, CFO, and two officers.

Past Year Performance: Over the past 12 months, FOXF has increased 100.55% in value. Throughout March and into April, there was a decline due to the pandemic, as many companies saw. Since April, the company has seen growth in value with a slight decline in August and September that was in reaction to a change in management and changes in insider ownership. FOXF’s 52-week high was $144.25 and low was $34.58. The current price is 127.15. Fox Factory Holding has seen dramatic growth over the past year, and there are no indications that this growth will come to a stop anytime soon. The company is expected to complete their expansion this year which is providing FOXF will the opportunity to improve their supply chain efficiency and in turn increase earnings in the future. There is also a high demand within the industry for FOXF’s products and the company expects to reach $1 billion in sales at the end of 2021. Although there has been some fluctuation in price over the past year, there has still been steady growth overall. FOXF was bought in November of last year at about $80 with a price target of a little over $100. The price quickly exceeded that price target within about a month. FOXF has performed well in the portfolio, and I suspect it will continue to be a strong performer. With the price drop within the last week, I see this as a time to buy as the price will be returning to 52-week highs as it was a week ago. 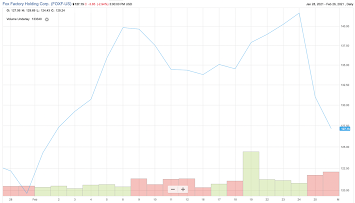 Source: FactSet
Posted by Marquette AIM at 5:45 AM