• A class action lawsuit has been filed against RIO regarding the cause of delays of the firm’s Mongolian based Oyu Tolgoi mine. The lawsuit alleges RIO concealed information concerning the delay of its most important growth project.

Key points: Management of Rio Tinto has been shaken up since the destruction of two ancient Aboriginal Rock shelters in May 2020. Investor and public backlash resulted in the release of Chief Executive Jean Jacques. RIO’s chairmen and non-directing executive are both scheduled to step down after the year’s general annual meeting.

The Juukan Gorge, one of Australia’s most significant archeological research sites, had shown evidence of human habitation dating back 46,000 years. An inquiry by the Parliament of the Commonwealth of Australia resulted in the conclusion that the mining giant “knew the value of what they were destroying but blew it up anyway.” The cave sat above 8 million tons of high-grade iron ore believed to be valued around $132M.

A new claim in the class action lawsuit against RIO on March 25, 2021 included the testimony of 12 individuals who worked for RIO or its contractors. The claim details the use of defective Chinese steel, incompetent engineering and poor procurement as the reasons for the projects significant delays and increases to cost. The lawsuit is hinges on the argument that RIO did not act in a timely manner informing investors of the project’s new costs and changes in schedule.

Rio’s partnering with Heliogen will result in the utilization of AI to control a network of mirrors used to make steam. This use of concentrated solar technology will make California’s largest open pit mine also the first in the country to use this type of power. RIO and Heliogen have already began securing government permits and plan to begin operations in 2022.

Since RIO’s announcement to release Chief Executive Jean Jacquees on May 3, 2021, the stock has dropped 16% from $90 to $75 per share. While the stock is still up 76% over the past year, testimonies in recent claims against the company regarding delays of its Oyu Tolgoi mine shift the class action court case overwhelmingly against the firm. The implementation of AI controlled solar power will eventually drive margins if it can weather the current challenges to its ESG.

Past Year Performance: RIO is up roughly 76% over the past 52 weeks. During this same time the industry average stock price growth is 139%. RIO has noticeably underperformed its competitors. RIO was able to recover from its March lows but will likely not be able to return to its all-time high of $90 reached March 2, 2021 due to the challenges previously detailed. 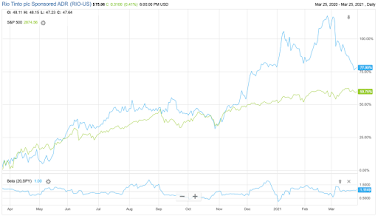 Overall, Rio Tinto has seen a full recovery and strong growth over the past year. Although the company will be the first to implement groundbreaking technology at its sites, past actions have the power to significantly hinder RIO’s performance. As of now the company has helped the AIM fund, but I believe the ancient cave destruction and the covering up of project delays shows poor leadership and RIO’s stock will continue to fall. 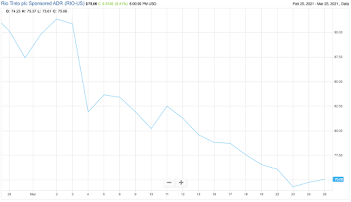 Posted by Marquette AIM at 8:22 PM