Disclosure: The AIM Small-Cap Equity Fund currently holds this position. This article was written by myself, and it expresses my own opinions. I am not receiving compensation for it, and I have no business relationship with any company whose stock is mentioned in this article.

Key points: With escalating geopolitical tensions, rising inflation, and a Federal Reserve expected to raise rates seven times in 2022 according to the CME as of March 10th, a flattened yield curve poses a material threat to regional banks. Since the difference between the 10-year and 2-year treasury yield is only ~25bps, the interest paid by banks to customers has nearly converged to the interest generated from investments. According to INBK’s Q3 interest rate sensitivity analysis, an interest rate increase of 100bps reduces the company’s net interest income by 65bps over a twelve-month period. Despite this, INBK has positioned itself to undermine the risk of interest rate hikes in Q1 2022.

Non-Maturity Deposits (NMDs) have no stated maturities and allow for customers to withdraw funds at any point in time (i.e., retail savings, interest and non-interest-bearing checking accounts, money market accounts, etc.). Due to their short-term maturity and repricing nature, NMDs are characterized by their low sensitivity to interest rate risk, or deposit beta. In anticipation of the Fed’s expected rate hikes this year, INBK has improved its deposit composition by holding a larger percentage of NMDs (2.8% increase since 3Q21) and a smaller percentage of MMDA & Savings accounts (0.84% decrease) and CDs & Brokered Deposits (7.1% decrease).

INBK saw a favorable fourth quarter as net income and diluted EPS ended the fiscal year up 63% and 61%, respectively, over 2020 results. Net Interest Margin (NIM) increased 30 bps to 2.30% from 2.00% in the third quarter, driven by a 22bp increase in the company’s yield on loans and a 6bp decline in the cost of interest-bearing deposits. NIM growth is expected to continue as $712.8 million CDs with a weighted average cost of 1.02% will mature in the next twelve months, and replacement costs are currently in the range of ~0.55%. Simply put, the company’s yields on assets are increasing while deposit costs are decreasing. CD repricing coupled with a deposit composition favoring NMDs, which provides a cheaper source of funding for the Banks’ assets than other means, will catalyze future NIM expansion.

INBK’s partnership with ApplePie and the acquisition of First Century Bancorp (expected to close 1H22) are proving to be lucrative. ApplePie Capital, a franchise loan marketplace that sold $100 million of its core conventional loans to INBK in 4Q21, has given the company a strong franchise pipeline with a growing SBA loan portfolio. Franchise loan balances were up 218% to $81.4 million from 3Q21, and SBA loans have grown nearly 6% over the same period. Since only ~7.8% of First Century’s total assets are comprised of loans, INBK management has decided to use $150 million of its excess liquidity to retire the company’s high-cost deposits and use another $150 million to purchase securities at yields close to 1.5%. The merger will effectively raise asset yields as INBK’s current excess cash earning an average yield of only 0.33% will be reduced while securities earning ~1.5% will be gained. NIM will further expand as higher-cost deposits will be retired.

Since being inducted into the AIM Small Cap Fund, INBK is up ~1.5%. The stock reached an all-time high at $52.80 following its earnings release on January 19, 2022, before a steady decline to today’s price. INBK followed the performance of the Russell 2000 closely until it announced its merger with First Century Bancorp on November 2, 2021, when the stock jumped over 25% in a single day.

Past Year Performance: Despite a negligible change in the stock’s price since November, INBK still remains undervalued as the company’s P/TBV of ~1.2x falls short of a regional/tech-centric bank peer average of ~1.7x. With a P/E of 9.8x and EPS growth anticipated to add another dollar from the merger of First Century in 2022, it’s safe to say that Ben L’Empereur’s thesis remains palatable. 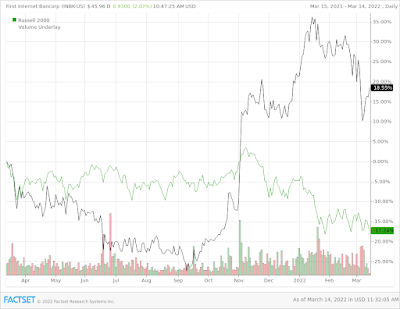 Management has aptly positioned INBK to mitigate the risk of high deposit betas from the Fed’s expected seven rate hikes in 2022. Several factors are expected to catalyze expansion in the Bank’s NIM in the coming years; CD repricing in the next twelve months (weighted average cost 1.02% compared to current replacement cost ~0.55%), changing deposit composition favoring NMDs (cheaper source of funding for Bank’s assets), and the deployment of excess capital from the First Century merger. It’s evident that management understands how to weather interest rate risk while being exceptional capital allocators. Despite this, The Street continues to price First Internet Bancorp at a ~40% discount per relative valuations. 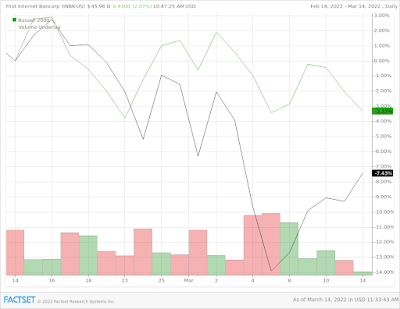