Key Points: Moving into 2018 Connecticut Water Supply expanded their spending plan by 18%.  Part of that plan will go to the acquisition of Heritage Village Water which was not included in the 2017 spending plan.  Connecticut Water approximates 35% of their capital will go towards the replacement of piping and other projects that will bolster their infrastructure.  This firm strongly values the health of the environment and has pledged money to protect their facilities from water leakage, especially from their water treatment plants.

Connecticut Water Supply continues to look for growth opportunities which was reflected in their increased spending plan, although it should be noted that a portion of that money will be directed towards their acquisitions from 2017.  With the completion of their new Rockwell Facility, 85,000 people will be served public drinking water from their plant.
Eric Thornburg resigned as CEO of Connecticut Water Supply on seemingly good terms as he pursued a similar role with SJW group in San Jose, CA.  David Benoit was unanimously elected as the interim CEO and has served 21 years as the CFO of Connecticut Water Supply.  Benoit has been credited with the financial success of the company and his movement to CEO was seen in a positive light.

A $.2975 quarterly dividend was declared payable on December 15th of 2017.  The dividend continued unchanged from the previous quarter and finalized the year with an annual dividend of $1.19 per share.  On November 9th, 2017 the annual dividend yield was 1.9%.

On November 29th, 2017 Connecticut Water Supply hit a high of $63.55.  Since the price high, Connecticut Water Supply’s stock price has dropped 17.4% over the past two months.  The water utility industry as a whole has been struggling the past couple of months as seen on figure 1, with the Russel 2000 having an approximate 20% drop over the same time period.  CTWS has had fairly large price fluctuations over the past six months but has never left the range of low $60s to low $50s.  Even with the completion of major projects CTWS still has not found the major drivers required to push it out of the price bounds that it currently finds itself in.

Past Year Performance: CTWS has dropped in price by 2% over the past year.  While that may seem like an insignificant drop, CTWS has undergone extreme volatility moving to a high of $63.55 and a low of $52.13.  Its current price is nearly at the lowest trading price reached by the stock over the past year and could be a good buying opportunity.  The volatility of CTWS can be tied to interest rates.  The utility sector as a whole seems to be more reliant on the current interest rates and patterns can be seen between the sector and bond yields.  As bond yields rally, the utility sector falls.  The attractiveness of dividend paying utilities have been losing their luster especially when banks have been moving the sector as a whole into a category of under-performance. 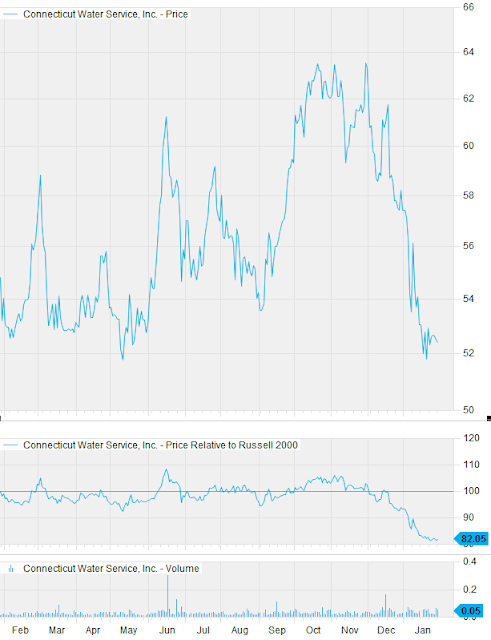 Connecticut Water Supply pledging an 18% increase in spending for the next year is a positive sign that they are continuing to search for ways to grow.  CTWS stated that they were going to be spending 35% of their capital in 2018 on the bolstering of their infrastructure.  This company comes across as extremely careful, which is important in an industry where people count on the water being clean when it is provided to them.  The issue with CTWS lies in its inability to find a strong driver.  While utility companies typically rely on their dividends to attract investors, this current market climate with interest rates looking to rally spells out trouble for this industry.  I worry that if CTWS is unable to climb out of this trench, they could spend a very long time trapped at a lower stock price.

Posted by Marquette AIM at 9:09 PM