• Rio Tinto Plc, Inc. (NYSE:RIO) is engaged in the business of exploring, mining, and processing of mineral resources. It is one of the largest and most cost-effective producers of iron ore, aluminum, copper, coal, diamonds, gold, and other industrial minerals. It distributes its commodities to many different countries and some of their biggest customers are China, Great Britain, Hong Kong, Norway, and Canada.


• The company's iron ore assets in Western Australia are some of the lowest-cost assets in the iron ore industry and given the proximity to China, provide a tremendous advantage.


• Current strong growth due to an increase in iron ore production levels of 360MM mtpa.


• The company maintains increased exposure to aluminum relative to other miners. If aluminum prices remain weak it could prove difficult to sell Pacific Aluminum assets at reasonable price.


• Environmental laws becoming stricter, restricting mine development or even mine closures


• Currency exchange rate fluctuations, have a profound effect on the prices of commodities and affect financial results due to the geographical diversity of the miners’ operations and sales.


Key points: Rio Tinto is an interesting stock. With their current CFO and Chairperson ready to step down. This leads to increased uncertainty. Why are both leaving at the same time? The stock price is also the highest it has ever been.  In addition, the company’s performance is exposed to movements in commodity prices, which makes this a highly cyclical business. The company has capitalized on the strength in commodity prices seen in 2016 by improving its balance sheet and reducing its cost structure. The company has achieved roughly $2.1 billion of cost savings since the start of last year. It has managed to gradually reduce cash costs at its core iron ore production business from more than $22 per ton in 2013 to $13.80 per ton in 2017. This has made Rio Tinto one of the lowest cost operators that can continue generating strong levels of earnings and cash flows in a weak commodity price environment, which partly mitigates the commodity price risks.


The biggest risk is the global economy as demand for metals and minerals is highly correlated to economic growth. China is the world’s largest consumer of aluminum, coal, copper, iron ore, nickel, and steel. A material slowing in China’s economic growth trajectory could result in lower prices for commodities. May suppress global prices.


RIO is expected to continue seeking ways to reduce expense for its mining operations and closing any unprofitable branches while continuing the track it has been on. RIO’s cost effective ways have led RIO to being one of the top market performers but given the weak commodity price environment they will need to continue looking for ways to be more cost effective. This could lead to a reduction in stock price if they are not proactive.


The commodities market is notorious for boom and bust cycles and has been on the upswing since February 2016, Rio Tinto’s stock is up ~4.5% in the last month. That is a solid rate of growth, and RIO has increased from $45 a share to $56.07 a share in the last six months. RIO has recently reached its 52-week high of 57.78 and is currently at 56.07. Has this stock already reached its height? Hopefully the boom cycle will continue.


Past Year Performance: RIO has increased ~31.85% in value over the past year, but the stock may have reached its potential as it has reached its 52-week high recently at a high of $57.78. Though it pays high dividends and has reduced much of its debt expense in the past year and is one has one of the best capital structures in the industry. With the recent change in management and given the history of mining companies, this stock bears monitoring. This stock seems to be fairly priced, but it is hard to know if the stock has already reached its potential. 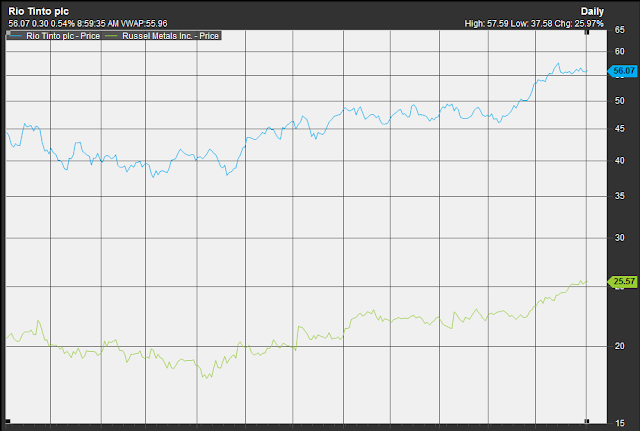 
The commodity market has been up since February 2016, and RIO has been able to take advantage. RIO has been able to improve its capital structure as a result as well as pay dividends. Though this is a highly cyclical company due to the industry the company is in. Therefore, if any commodity prices drop RIO could be in trouble. In addition, it is concerning to see the CFO and chairperson step down. Thus, this is a hard stock to read. RIO appears to be the industry leader in a weak industry that has happened to have a good run over the last year. Therefore, this stock has certainly caught my attention. As a result, this stock may need to be sold shorty depending on how one views commodity market playing out and if they want to have exposure to the commodity sector. Even though I’m cautious with this stock it does appear to be the best option of all the commodity stocks in the industry.
Posted by Marquette AIM at 12:06 PM