• BlackLine has failed to be profitable thus far, despite outperforming revenue growth each quarter.


• The company operates globally, and only recently attained their first customer in Hong Kong. Europe also continues to show demand above expectations.


• Tammy Cole has been hired as a Chief Strategy Officer along with ex-CEO of SolarWinds, Kevin Thompson, though their contribution has yet to be fully seen.


• The intercompany hub segment showed very disappointing growth in Q2 paired with unfavorable insider share selloffs, which have hurt the stock sizably in the last 6 months.


Key points: APAC remains the geographic for new growth, though the company has only a few customers in the area. However, each quarter the company has been able to attain first customers in various countries in the region. The situation looks favorable given BlackLine’s impressive customer renewal rate assuming the company can continue to lock in further customers in the surrounding area. Once BlackLine gains an influence in east Asia though, the growth outlook should notably improve.


BlackLine began by selling mainly to large enterprise players, and has only recently began penetrating the middle market. Many of these companies still do their accounting and financial close processes manually, and it seems only a matter of time until BlackLine is able to grab these low-hanging fruits.


BlackLine continues to operate in a low competition environment, and has stood to benefit from being the only company of its kind. However, if the company is able to scale successfully, the market will likely see competition arise given just how large the market is.


New management has been cited to be a strong source of growth, though expectations seem blown out of proportion, and may only serve as minor improvements for the company.


BlackLine IPO’d in late 2016, and saw the stock rise 40% by July of 2017. However, the stock then dropped 25% following a weak Q2 performance, and has been relatively stagnant ever since. The company is taking longer than expected to generate a profit, and concerns to the contrary have mounted since.


Past Year Performance: BL has grown by 22% over the last year, but the company remains disappointingly far from being profitable. The primary contributors to the stock’s performance in spite of profitability setbacks have been the company’s very strong gross margins and high renewal rate at 98%. The company has sustained high top-line growth, and the potential market remains daunting in terms of size.
BlackLine 1 Year Performance 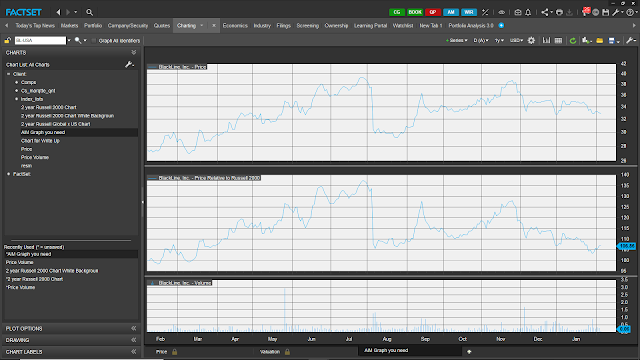 
The investment thesis for BlackLine remains as strong as ever, and the potential upside on the company has not changed. With such a high renewal rate, the company has shown that once in practice, the solutions are invaluable, and the problems seem to stem from unhappiness surrounding the company’s profitability. The TAM remains enormous, and a lack of real competition puts the company in a strong light in terms of being a growth stock.
Posted by Marquette AIM at 6:30 AM