• CalAmp Corp. (CAMP) is a company that offers solutions for mobile resource management, machine-to-machine communications, and other applications that require connectivity everywhere. These solutions are provided for energy, government, transportation, and automotive markets. CAMP operates in two business segments: Wireless DataCom and Satellite.

• Strong momentum in the MRM business is continuing, in large part due to an expanded relationship with Caterpillar.

• The acquisition of LoJack has not lived up to expectations. However, LoJack Italy has experienced strong growth in telematics demand.

• The new ASC 606 revenue recognition standard will have effects on CAMP. These effects still remain unknown as CalAmp does not need to comply with the new standard until March 2018.

• The auto industry is going through a dramatic change. This change poses both an opportunity and a threat for CalAmp.

Key points: CAMP reported strong numbers in their third fiscal quarter ending in November 2017. Sales were $2.2 million above the consensus due to strong performance in the mobile resource management (MRM) business. CAMP’s relationship with Caterpillar (CAT) contributed $13.5 million, which was a 24% increase from 2Q2017. This large sequential increase was in part because of an expansion of the relationship with CAT as well as a ramp-up in their business. Because the CAT business is expected to normalize in 4Q2017, the growth from this relationship will be lower.

In the initial write-up, the acquisition of LoJack was the top driver for CAMP. However, it appears that over a year later, LoJack has not contributed as it was forecasted. LoJack Italy, on the other hand, has driven CalAmps SaaS revenue by contributing half of the new 24,000 subscribers during 3Q17. The increase in subscribers is due to a strong telematics demand in Italy.

Because of CalAmp’s reporting timeframe, they are not required to adopt the ASC 606 until March 1, 2018. CAMP will be compliant by this deadline however it is too early to tell how this transition will affect CAMP. In my opinion, this change will have a major impact on reported sales and go-to-market strategies. CalAmp will also have an additional $1.5 million in general and administrative costs. In regards to the new tax policy, CAMP is positioned to benefit from the legislation due to a favorable impact on deferred tax assets.

CAMP provides proven aftermarket solutions for the 250 million US automobiles currently licensed. With the auto industry going through a very dramatic change, there is opportunity as well as threat for CAMP. CalAmp has great vehicle telematics products that could play a role in this industry change. For example, CAMP is in great position in terms of the electronic logging mandate, which is a regulation that will equip all trucks with hour-of-service monitors. The threat that comes into play are the original equipment manufacturers. Companies like Tesla, Amazon, and Apple have fully automated cars that already include solutions that are provided by CAMP in their cars.

CalAmp has been rather volatile lately, ranging from $24.76 to $23.05 over the span of five days at the beginning of February. A driver when this company was originally pitched was that it was trading near its 52-week low, hence it was undervalued. Now, the company is trading at $24.41 and its 52-week high is $25.45. I would be interested to see if CAMP can stay close to its 52-week high the next couple weeks.

Past Year Performance: CAMP has increased by 62% over the past year. I think this stock is appropriately valued as CAMP has seen share appreciation from continued investments to reaccelerate growth. I also think that CAMP is nearing its peak due to the fact that the auto industry is under such substantial change. In my opinion, the change is a bigger threat than it is opportunity for CAMP. 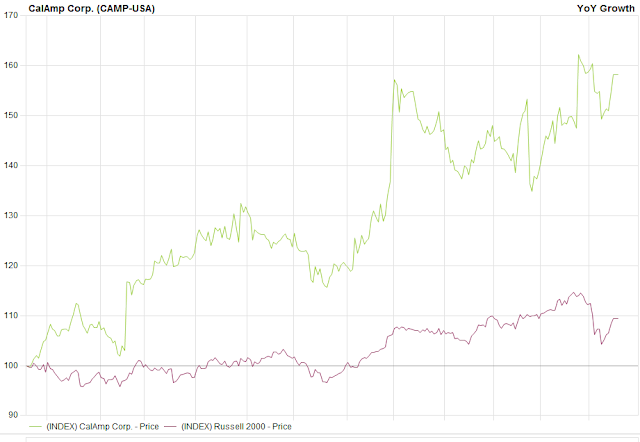 My takeaway from this research is that CAMP provides incredible solutions for plenty of different verticals. However, one of their largest industries, the auto industry, is under immense change that will greatly affect CalAmp’s growth opportunities. The mobile resource management segment will continue to grow, but I am skeptical if it can make up for potential losses in the auto industry. Overall, I am recommending that we sell CAMP from the AIM portfolio, and enjoy the 80% return on our investment.
Posted by Marquette AIM at 8:01 AM