• AxoGen, Inc. (NASDAQ:AXGN) produces and markets products to surgically repair peripheral nerve damage (damage to the central nervous system). Their range of products are available in the United States, Canada, the United Kingdom, and several other European countries.


• AXGN has a 5-year compounded annual revenue growth rate of 40.73%. They currently operate in a net loss; however, this is largely due to high sales and marketing expenses. As they continue to educate and train doctors about their product, those expenses will decrease and they will begin to experience greater profitability.


• AxoGen’s primary driver is the superiority of their products compared to other autografts and nerve conduits. Compared to other products, their Avance nerve graft uses the patient’s own cells to regenerate damaged nerves. In addition, Avance does not require additional surgeries to repair injured nerves.


Key points: AxoGen’s four main products (Avance Nerve Graft, AxoGuard Nerve Connector, AxoGuard Nerve Protector, and Avive Soft Tissue Membrane) are mainly used by reconstructive plastic surgeons, hand surgeons, and maxillofacial surgeons. From 2016 to 2017, AXGN’s sales and marketing expenses increased by 32.4%. They hope to increase surgeons’ understanding of nerve repair and expand the usage of their products. As a result of this increased spending, their active accounts have increased by 31% from 2016 to 2017. In addition, they have recently expanded their product portfolio to help with breast reconstruction nerve transfers and oral and maxillofacial surgeries, which increases their overall accessible market to $2.2 billion.


AXGN had a strong performance in 2017. Revenue increased to $60.4 million, representing a 47% increase, and gross margin increased from 84.3% to 84.6%. They continue to penetrate the market and educate doctors regarding their product. In 2017, they presented 15 national educational programs and hope to present 18 in 2018. On February 27, 2018, DecisionWise International named them the Employee Engagement Best Practices Award Winner. Given AXGN’s past performance and that they are just beginning to scratch the surface in this market, their stock is positioned to climb to new 52-week highs in 2018.


Over the past month, AXGN is up ~30% and is currently trading at $32.95. This is largely attributable to the 4th quarter earnings release. AXGN beat EPS by $0.01 and revenue by $1.06 million. In addition, they most recently released their annual report for 2017, in which management portrayed optimism moving forward.


AXGN has increased ~240% over the past year. AXGN has consistently grown the past couple years, and they are positioned well to continue to grow and penetrate their market as they proceed to educate surgeons and provide clinical data proving the superiority of their products to other competitors. 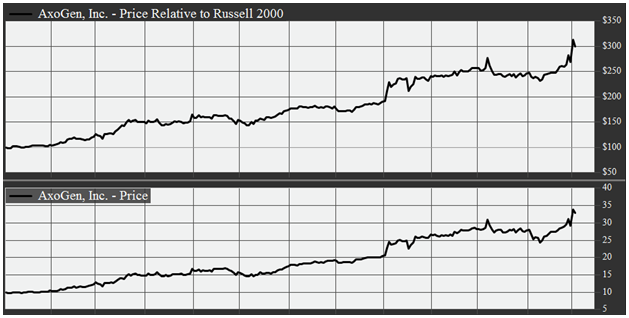 
Karen Zaderej has served as the president and CEO of AxoGen, Inc. since September 2011. Ms. Zaderej has effectively and efficiently grown AXGN since 2011. Looking forward, it will be important to see how their new breast reconstruction neurotization and their oral and maxillofacial procedures perform. With the introduction of these new procedures, their market has increased from about $1.6 billion to $2.2 billion. The high growth and success of their products have contributed to their large stock price increase. Despite this dramatic increase over the past year, a “buy” is still recommended as AXGN is poised to continue to grow as they become a dominant player in the market. 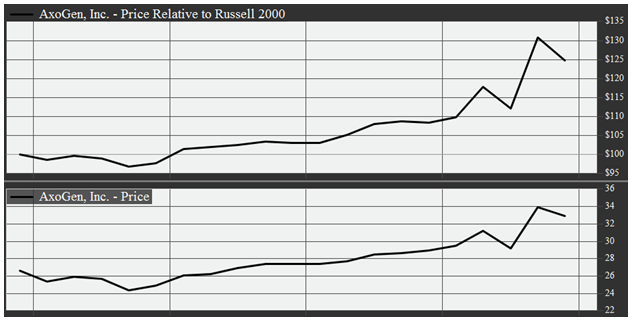 Posted by Marquette AIM at 8:20 PM