Disclosure: The AIM Equity Fund currently holds this position. I wrote this article, and it expresses my own opinions. I am not receiving compensation for it and I have no business relationship with any company whose stock is mentioned in this article.


·       RSP Permian announced in their 2017 10-K that the board of directors has approved an initial budget of between $815 to $895 million for drilling, completion, and infrastructure of adding an additional rig and frac crew. This work is assumed to be completed by the middle of 2018.


·       The company completed the acquisition of Silver Hill Energy Partners in March of 2017 for a price of $1.25 billion in cash and 31 million shares of common stock. Silver Hill is fellow E&P company that owns adjoining plots of undeveloped land located in the Permian Basin.


·       The YTD stock price open at $40.68 and has been steadily increasing since
Key points: RSP Permian has been consistently growing sales since their IPO in 2014. However, their net income has not yielded the same dependability as their sales. Management believes the success of the company is dependent on the ability to manage growth and remain competitive. An omnipresent risk is that of competition, for RSP that competition means further diversified oil and natural gas companies that would allow for lower prices. Another risk is the unpredictability of federal and state environmental regulations that could alter demand and have a material impact on revenue.


RSP’s management is comprised of individual experience and industry knowledge, which collectively make the team have a broad industry-wide expertise. This team has formed a cohesion that has allowed for such successful investing as their recent acquisition and capital plan to further grow their well presence in the Permian Basin. They express in the 10-K their plan to continue to make sizeable capital investments in E&P, development, and acquisition in the oil & gas industry sector. These capital expenditures will allow RSP to grow sales and be even more competitive.


Although the plan to further extend their exposure in the oil & natural gas industry will yield more growth and higher sales, they also will become more exposed to the various risks of the oil & natural gas industry. The experienced management team is aware of these risks and uses commodity derivatives to hedge this risk. Although this has been an historical tactic that management has enacted, they re-state that they are not under any obligation to hedge and thus the amount the hedge is at management’s discretion.
What has the stock done lately?


RSP was able to meet or exceed projected earnings in all of the past four quarters. These steady numbers have analysts encouraging clients to buy, which has helped keep the price above the S&P 500 average. Earnings were released on February 27, 2018, which resulted in a $2 dollar price increase.


Past Year Performance: Even after RSP’s strong earnings performance for the entirety of 2017 their stock price remained volatile. This is a result of the price volatility of oil, their ability to meet earnings despite large price swings in oil is an indicator of management’s ability to successfully handle short term oil price volatility. 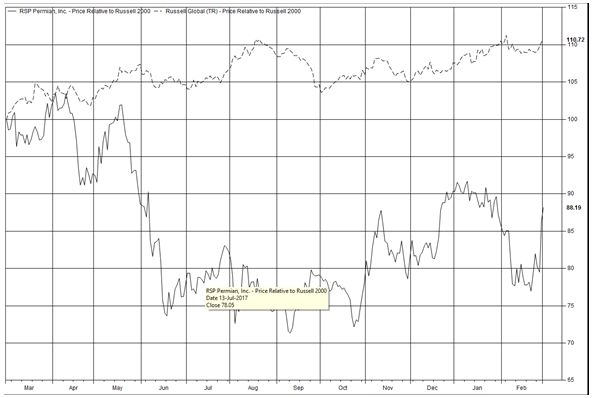 
RSP’s history of strong earnings should encourage current and potential holders that this is a company with plenty of growth left before it matures. While the oil & natural gas industry is filled with uncertainty, specifically with the volatile price of oil, management has demonstrated their ability to limit the negative effects of the price swings.  RSP’s veteran management has positioned the company for a strong future.
Posted by Marquette AIM at 11:18 AM