Disclosure: The AIM Small-Cap Equity Fund currently holds this position. This article was written by myself, and it expresses my own opinions. I am not receiving compensation for it, and I have no business relationship with any company whose stock is mentioned in this article.

Arguably what impressed investors most was CW’s ability to expand margins. In FY ’21, operating margins expanded 320-bps. This jump can be attributed to CW’s FY ’20 restructuring initiatives. These initiatives set to identify any administrative inefficiencies that hampered margins. Paired with this was operational initiatives that set to do the same on the manufacturing side. Because of the success of these initiatives management invested an incremental $14m in R&D which should pay dividends in future growth opportunities.

CW has consistently bought back shares. In FY ’20, CW repurchased $200m in shares. In FY ’21, that number grew to $300m which is $50m more than what CW had initially announced. Ultimately this share buyback program has contributed to shareholders seeing a 37% increase in diluted EPS, YoY.

January 2022 was an active month for CW. In this month they announced the acquisition of Safran’s arresting systems business for $240m cash which is expected to close in Q3 of FY ’22. This acquisition will expand their global defense portfolio and is projected to be accretive to EPS in year one. Also, in this month CW chose to divest Phönix Group, their German valves business. Phönix was acquired in 2013 and divested because of the inability to recognize anticipated synergies regardless of time and resources contributed.

Since earnings were released CW has been trading in the $152 area. This excludes the share price downturn to $145.23 on March 16. 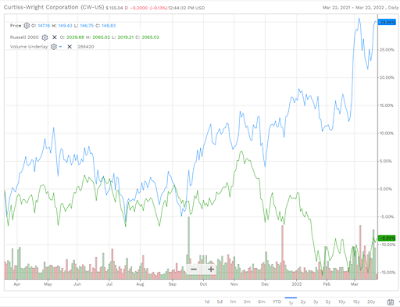 When CW was pitched in Fall of 2020, the price target was $133.35. While CW currently exceeds that value, I believe that there is still a lot of potential and growth opportunities. In May 2021, the federal government announced that 2022 defense spending would be $715 billion, a 1.6% YoY increase. Because of Russia’s invasion of Ukraine many countries are revaluating their defense spending. There have been reports that the US could increase the 2023 defense budget to $780 billion. 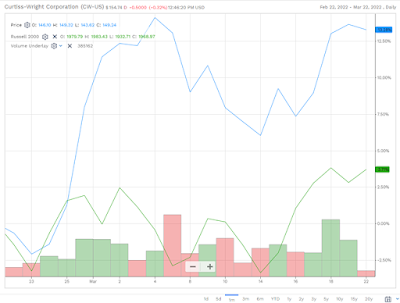 Source: FactSet
Posted by Marquette AIM at 8:20 AM