Ardagh Metal Packaging was the metal-packaging unit spun off from Ardagh Group SA (ARD). The company completed their business partnering with Gores Holdings V on August 4, 2021. Ardagh Group SA has remained the majority shareholder at 75.32% ownership.

On April 5, 2022, Ardagh Metal Packaging submitted plans for a $200 million (£150 million) beverage can plant. This facility will be located in Northern Ireland, 40,000 square meters in size, and will create about 160 on site jobs and about 30 indirect jobs through associated businesses. This facility will strengthen customer relationships across Ireland and Great Britain and grow their production base in Europe. David Spratt, CEO of Ardagh Metal Packaging Europe, is expecting the plant to be operational in 2023.

The stock experienced increased volatility in March 2022. AMBP hit a 52-week low of $7.17 on March 17 and rebounded by the end of the following week to reach a price of $8.80. Since then the stock has been in decline. This is despite submitting plans to build a new beverage can facility in Ireland. 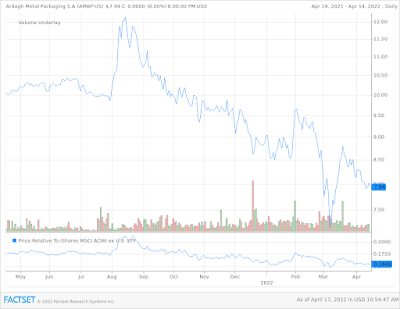 The market positively received the news of the completion of the partnership with Gores Holdings V. Since then, however, the company has been underperforming to the benchmark and has been in a steady decline. Despite the news of a new facility, the stock continues to decline. The company faces headwinds from current macro events in Europe, increase in material and transportation costs, and rising interest rates. The company will need to effectively manage these costs to improve their current situation and to stop their share price from further decline. 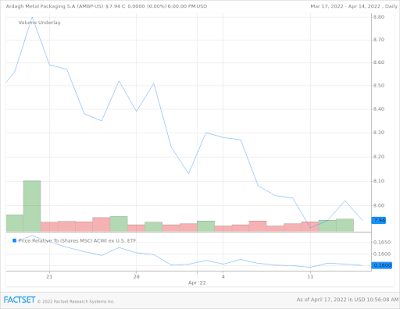 Source: FactSet
Posted by Marquette AIM at 8:35 AM