• Astec, Industries (NASDAQ: ASTE) is a global leader in the manufacturing of equipment and materials for asphalt road building, aggregate processing, oil, gas and water well drilling and wood processing, and other services. Astec offers over 220 products that help to service infrastructure and construction firms through three segments: the Infrastructure Group, the Aggregate & Mining Group, and the Energy Group. The company is headquartered in Chattanooga, Tennessee.

• America’s deteriorating infrastructure will provide a steady source of sales, but no near term catalyst.

Key points: The Trump Administration originally listed a trillion dollar infrastructure spending bill as one of their 100-day priority items. However, as the year has gone on and the legislative agenda has stalled and the incremental revenues that investors had priced in failed to materialize, Astec’s share price fell to a more realistic level. Confusion over what the plan will eventually look like makes pricing in any projects difficult. While Speaker Ryan proposed that for “every $1 of federal dollars, there [would be] $40 of private sector spending,” the President ruled out private-public partnerships.

Despite the lack of a national spending plan, American infrastructure is in need an upgrade; The American Society of Civil Engineers gave the United States a “D+”, or failing grade in 2017. This grade has remained little changed for the last 16 years, however, so there is little reason to believe that this report will have a meaningful change. While a real fix has yet to materialize, Astec is poised to continue to provide products to the firms working on these types of projects, and there is clearly enough work to be done.

Past Year Performance: Astec outperformed the Russell 2000 through most of 2016 as both presidential candidates discussed trillion dollar infrastructure plans that would have driven sales. Beginning in February, the realization that the spending would be a lower priority for the Administration caused prices to fall until they stabilized at their current price. A disappointing Q3 caused prices to fall almost 18% due to a disappointing quarter. 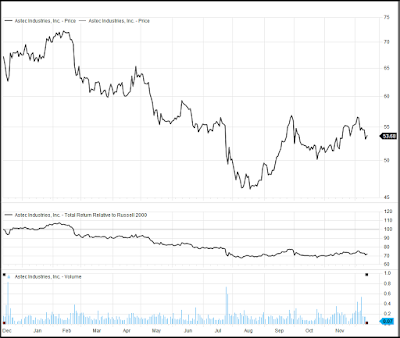 
Astec’s industry positioning gives them significant exposure to the kind of spending that would come out of an infrastructure plan. While tax reform will be a tailwind, it will not provide the same kind of price movement that sales growth would. Astec faces little downside risk and little upside without a bill to sign. It is worth review should the Administrations fiscal policies change in the coming months.
Posted by Marquette AIM at 7:30 AM