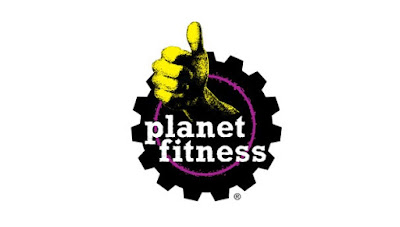 Key points: PLNT continues to deliver consistent earnings and revenue beat with exceptional growth coming from PLNT’s franchise segment, which currently reports ~82% EBIT margins. While the stock has risen 65% since PLNT’s IPO in August of 2015, and ~50% since the start of the year, PLNT continues to have several catalysts to drive share price. Three catalysts that will continue to allow PLNT to outpace the market are international expansion, black card memberships and fragmentation within the United States market.

PLNT has been expanding into Canada since 2014, but more recently noted expansion into Panama. As PLNT continues to be successful in the Canadian market and with an assumed long term target of 300 stores, PLNT will need be assertive and thorough in evaluating new markets as they continue to expand. While failure to expand successfully into new markets would burden PLNT’s expansion hopes and overall profitability of the company, management was positive regarding the success thus far on the 3Q earnings release, stating presale memberships have been extremely strong internationally.

Secondly, PLNT has significant pricing power over peers and has recently increased their highest priced and most bought membership (Black Card membership) from $19.99 to $21.99, because of positive response to consumer’s price elasticity. The Black Card membership rolled out on October 1, 2017 and will continue to provide incremental profitability to the company, especially heading into 4Q2017 and 1Q2018, the two busiest quarters for PLNT. Despite the price increase, the membership offers a significant discount relative to peers considering the benefits it provides.

Lastly, PLNT will need to continue being a market leader and establish its presence within their largest market, the United States. Although there is uncertainty around the long term target, PLNT needs to focus on finding the right markets and opportunities for store growth to be accretive. Over-expanding into local markets that lack the ideal demographics would pressure margins and cause investors to wonder about the effectiveness of managements ability to scale growth.

Past Year Performance:
PLNT has been one of the hotter small-cap domestic consumer discretionary stocks on the market that Amazon has not been able to penetrate. PLNT is up ~50% YTD and ~26% over the one-year period. The stock has been held down by significant short (15-20% of float), but continues to show its ability to thrive in the consumer market. 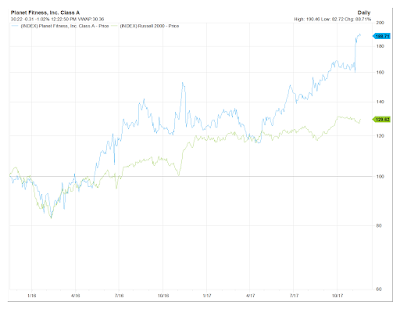 My Takeaway
Chris Rondeau and his team continue to outpace the market and prove the effectiveness of their unique business model. With full year guidance raised, increased pricing on membership’s due to positive responses from customers, and significant opportunities within the US and internationally, I believe that Planet Fitness has significant room for upside. I recommend that the AIM Small Cap Equity Fund should continue to hold PLNT. 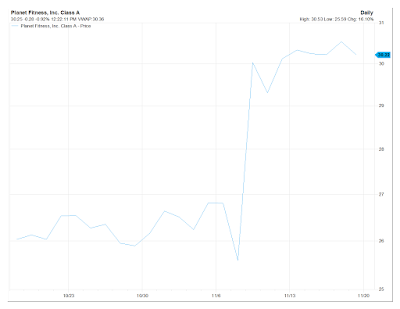