•Consistent FFO growth, and 5% yield have made little to no impact on its average 28% discount to NAV. REIT Conversion on hold for now.

Key points: Brookfield Property Partners operates as a limited partnership and has upheld a strong track record of generating returns through its value-oriented investment approach. After reporting 2Q17 earnings, BPY continues to show its strength despite a pressured retail space. BYP increased FFO 2% in 2Q, which makes the 9th consecutive quarter of YoY FFO growth. The company also has maintained consistent same store growth in the range of 2-3% and has grown annual distribution in line with the target of 5-8%. The current 5% yield is backed by solid cash flows from the retail and office core portfolios. The opportunistic portfolio has begun to show its high return potential as well, with now over $5.2B invested (20% of assets).

Over the past year, it was unclear whether BPY would continue their LP. or decide to pursue a REIT conversion. At BPY’s Investor Day in September it was confirmed that the firm is no longer actively pursuing REIT conversation, but was not ruled out entirely. The current LP structure allows BPY to continue recycling capital without major restriction.

Through its capital recycling efforts, BPY raised $825M of equity capital in the first two quarters of 2017, and additional $815M is expected from asset sales during the 3Q. Recently, a larger portion of recycled capital has been allocated to its opportunistic fund to capitalize on mispriced assets with operational upside. The opportunistic fund invests in high-quality, globally diversified private equity sponsored funds that generally earn +20% returns. The portfolio should continue to grow to $7M assets by 2018 and self-fund future investments in similar strategies.  The company also put capital to work to buy back $253.7M worth of units during 2017, reducing OS by 4%. The undervalued share price will likely lead to continued focus on buybacks in upcoming quarters.

Retail is the most hated investment space today, and negative headlines continue to dominate. As contrarian investors, BPY sees the negative sentiment as an opportunity to invest further. BPY has payed close attention to the challenges/trends facing retail, and has adapted its core portfolio accordingly to remain 95% occupied. BPY has yielded 8-10% by redeveloping traditional department store locations into higher revenue generating uses such as entertainment, restaurants, and omni-channel stores. BPY has also capitalized on e-commerce brands that are expanding to brick-and-mortar to widen customer base, and signed leases with retailers Bonobos, UNTUCK it, and Warby Parker. The company recently increased its position in General Growth Properties to 34% OS.

In addition, APY’s core office portfolio continues to be one of the most highly regarded, and premier office portfolios in the world. BPY’s active deployment pipeline with expected deliveries of $7.5M SF should meaningfully impact NOI going forward. Leasing momentum has also picked up this year, most notably for the Manhattan West Development Site. In 3Q, BPY signed leases with Amazon and EY bringing the tower to 82% pre-committed.

The only major movement in the past couple months occurred on October 4th, where the stock jumped 5.5% in one trading day to $24.80 following an article published by Reuters. It was reported that BPY was considering a partial sale of its Northeastern Office portfolio for $10B. BPY has been able to take advantage of high valuations by selling certain core properties, but since the stock declined to its current level today.

BPY has been able to perform well in the wake of the market’s deterioration of its retail portfolio. Retail represents approximately ½ half of invested assets, and 34% interest in GGP continues to affect sentiment. Despite the retail portfolio being off by over 20% YTD, the shares have still managed to rise by 6%. The stock has also outperformed the MSCI US REIT index by 4%. The LP business model makes the stock a unique real estate vehicle, but is not widely followed and excludes billions of $$ in index money from chasing it. 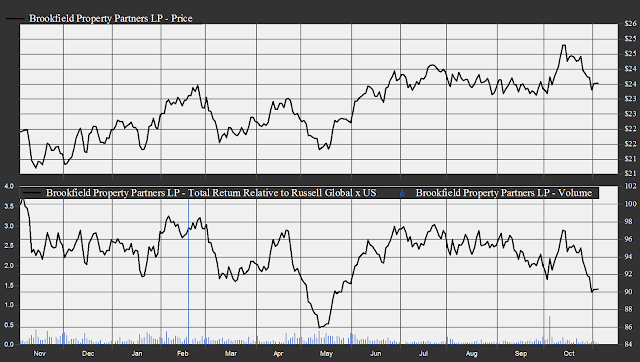 
Finding a real estate company with superior assets that are globally diversified like BPY’s core portfolio is hard to come by. The shares still trade at a 23% percent discount to its $29 NAV, but management’s involvement is encouraging, and the buyback should set a floor for the stock at around $23 in the meantime. The company’s strong FFO growth and 5% yield has yet to narrow the discount gap, but supports future capital appreciation of its stock when retail turns around.  It may take some time to play out but returns of +20% in opportunistic strategies give BPY strong risk/return characteristics and will complement stable cash flow from the core portfolios. Management is targeting after tax returns of 12-15% per year on its invested capital looking forward. It is recommended BPY is held in the AIM fund with its original target price of $28, and offers outsized-return potential in today’s benign environment.
Posted by Marquette AIM at 12:39 PM