An upcoming event at Marquette: A TRANSATLANTIC RIFT? THE FUTURE OF US-EUROPEAN RELATIONS

There is a Marquette Forum affiliated event coming up this Tuesday (February 5th) on
“A Transatlantic Rift? The Future of US-European Relations.”

It’s a great panel with Marquette's Risa Brooks (Political Science), the ambassadors from Croatia and Estonia, and the director of the Center for a New American Security. 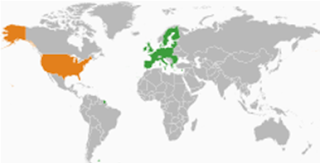 The Marquette Forum theme of “democracy in troubled times” is related not only to domestic political events in the United States and Europe but also to relations between the United States and Europe. Please join us on February 5th and 10:30 a.m. as an esteemed panel of scholars and government officials will briefly present on, and then discuss with the audience, the topic “A Transatlantic Rift? The future of US-European Relations.”

A Marquette Forum Event.
Hosted by the Marquette University Department of Political Science.