Superior Group of Companies, Inc. (SGC, $16.84): “How Superior Are We Talking?”
By: Manuela Chaves, AIM Student at Marquette University 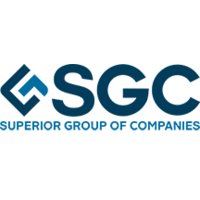 Disclosure: The AIM Equity Fund currently holds this position. This article was written by myself, and it expresses my own opinions. I am not receiving compensation for it and I have no business relationship with any company whose stock is mentioned in this article.
Summary
· Superior Group of Companies, Inc. (NASDAQ: SGC) is the manufacture and sale of uniforms, corporate identity apparel, career apparel, and accessories to medical and health fields as well as for the industrial, commercial, leisure, and public safety industries.

· SGC announced their CapEx investment strategy which will hopefully improve operational efficiencies and innovation across their enterprise.

· In the last three months, the stock has hit a new 52-week low four times.

Margin analysis seems to be a hard one to swallow for FY 2018. Gross margin was 37.4% which is slightly lower than that of 2017 from which management attributes to a higher sales mix and lower margins from the Promotional Products business.  EBITDA margin resulted to be 9.4% which was a big downgrade from when it was 11.3% in 2017. Operating margin was 4.9%, lower than that of 2017 when it was 7.1%. These results were due to the impact of the gross margin mix and the 210 basis point increase in SG&A.

Management has a planned CapEx investment strategy to increase it to 2.5% - 3.5% of sales to support its infrastructure growth across their business segments and believes this will improve their speed to market, enhance manufacturing supply chain capability, and greatly improve efficiencies, operational flexibility and collaboration across their enterprise over the next 12 to 24 months.

On May 03, 2019, the Board of Directors had approved a stock repurchase program authorizing the repurchase of up to 750,000 shares of the company’s common stock from time to time. The company currently has about 15.2M shares outstanding. Moreover, the board also declared an unchanged dividend of $0.10 per share, payable May 29, 2019 to shareholders.

SGC appointed Michael J. Attinella as the company’s new CFO and treasurer. He succeeds Andrew D. Demott in the CFO position as Demott will now fully focus on his role as COO of the company. Mr. Attinella came from HSNi, a $3.7B NASDAQ listed leading electronic retailer where he took the role as senior VP and CAO since 2008 and Executive VP and CFO since 2013.

SGC’s 1-month performance shows a 3.1% decline and its 3-month performance resulted in a 5.67% fall, mostly attributed to earnings which were either missed or from margin pressure as the major decrease in price occurred in February and May.

What has the stock done in the past year? 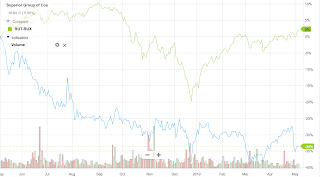 Superior Group of Companies is working to overcome its struggles. Margin pressure continues to be a problem but the company is working on improving its operational efficiencies with its new CapEx investment strategy. I believe that once these margins start to improve, the company will see better return in the future. And although the stock has not been performing to its expectations in the last 52 weeks, I recommend SGC as a Hold. 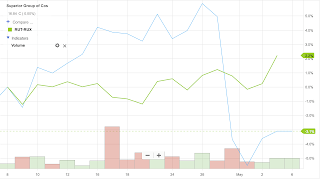 Posted by Marquette AIM at 7:03 PM