While maybe not as memorable as Alexander Graham Bell’s summoning of his assistant in another room by saying, “Mr. Watson, come here; I want you,” this is how the first AIM program stock pitch began. 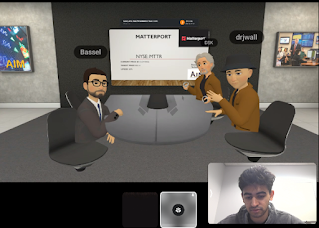 Joining Krause in the virtual AIM Metaverse Room (and wearing Oculus Quest VR devices) were Dr. Joe Wall and Bassel Fouad, along with the entire AIM Class of 2023 who added in 2D. Bassel pitched Matterport (ticker: MTTR) as a possible addition to the student managed fund. While admittedly this was experimental and at times the videos were as jittery as a GoPro user on a snowboard, it marked another first for the program.

Krause said, “Kudos to Dr. Wall and Bassel for stepping up. Using Meta’s Workroom for an AIM stock pitch allowed us to show the ability to connect multiple real-time users in remote locations simultaneously. Although this version of the metaverse is still-developing, it revealed the power of virtual reality and offered a glimpse into the future.

Here’s the full video of the first equity stock pitch on the metaverse: https://youtu.be/Nr6MVdDkh_Y