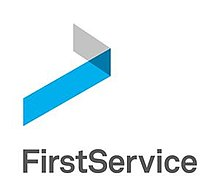 FirstService Corp. (NASDAQ: FSV) is a Canadian real estate firm that provides property management services in the United States and Canada, primary in the residential space. Offerings include security services, engineering and maintenance, proprietary banking and insurance products, and management solutions. The company operates through both company-owned and franchised subsidiaries, namely California Closets, Century Fire Protection, and Paul Davis Restorations among many others.

Key points: FirstService Corp. has consistently grown since 2015, positioning themselves as one of the premier property management and restoration conglomerates in North America. Through many smaller acquisitions in various concentrated metropolitan areas over the years, management has pursued a strategy of aggressive yet consistent inorganic growth by building up their subsidiary brands through franchising before purchasing them. In terms of debt, FirstService typically uses cash in acquiring other companies, but the firm has ~$415mm due in variable rate term loans in mid-2024 and $120mm owed in fixed rate bonds by the beginning of 2023, so they will need to generate extra liquidity over the next year in order to meet those deadlines. Following the end of the third quarter of 2021, FirstService had ~$141mm in Cash & Cash Equivalents as well as over $600mm in Liquidity Available according to their most recent financial statements.  In five years, following those two major repayments, FirstService’s management plans to only have about $30mm in debt obligations left on the balance sheet.

Over the past year, FirstService has made a number of acquisitions to continue to grow, but a majority of the firms acquired have already been operating under the company’s operating subsidiary, First Onsite Restoration. Acquisitions include A-1 Flood Tech out of Virginia, Bales Restoration in the Seattle area, Kauai Restoration & Cleaning in Hawaii, Emergency Fire & Water Restoration based out of Milwaukee, and Chesapeake Sprinkler Company from Maryland. By acquiring smaller, more local companies all around North America, FirstService is slowly but surely buying their way into a majority of the major metropolitan markets without having to start from scratch in each new area. These deals not only strengthen FirstService’s brand, but also help to expand the company’s footprint across the United States, allowing FirstService to service new geographical areas on a regular basis.

Since 2015, when dividends were first initiated by FirstService, the company has increased its distributions to shareholders by an astounding 10% each year as the brand has grown exponentially. FirstService paid a dividend of $0.1825 per share in each quarter of 2021, and for the first time in 2022, the company announced that it would pay an 11% increase in dividends. This marks the first time that FSV has increased distributions at an amount greater than 10%, and it is a positive indicator for the financial health of the company in both the short- and long-term future.

After nearly peaking in price at the very end of December 2021 at $196.47, FirstService has fallen nearly 30% despite no material bad news or otherwise negatively implicating information being released up to this point. With no fundamental explanation for the drop in price, FSV shares are now implied to be trading with at least a 30% discount, presenting a great opportunity for investors also looking for consistently growing dividends.

Past Year Performance: With shares seeing an extended drop in price since New Year’s, FirstService’s stock price has only grown 1.7% year over year. While that is not quite encouraging, FSV shares have still grown at a compound annual growth rate (CAGR) of 24.9% over the past five years.; in that same time period, the S&P 500 grew at a CAGR of 13.3% while the MSCI only increased in price by a CAGR of 4.8%, illustrating that FSV consistently and significantly outgains the market. 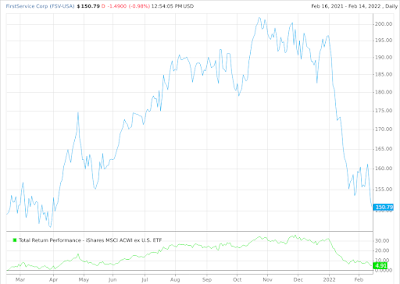 Especially following the sharp decline in price at the start of the 2022 fiscal year, I recommend FirstService Corp. as a Buy. Since being added to the AIM fund at a price of $49.89 in February of 2017, FSV has generated returns of over 203.3%. With a peak price of over $200 implying a share price discount of over 30%, as well as a continued strategy of inorganic growth through mostly cash acquisitions, FirstService still has much room to grow, especially following the housing boom during the COVID-19 Pandemic. 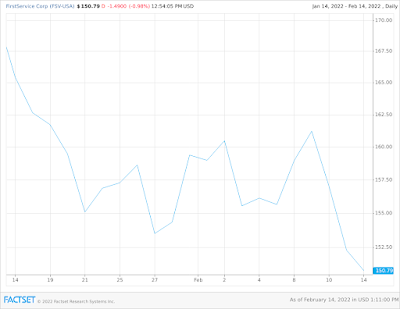