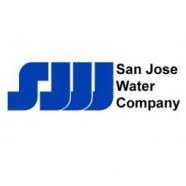 ·     Q3 saw revenue of $124.85M, an increase of $275K over the same period for 2017. Net income for the quarter was $4M lower than 2017 at $15.8M. The decrease was primarily due to increased operating expenses related higher per unit water cost and merger expenses from the deal with Connecticut Water.

·      In August 2018, Connecticut Water and SJW agreed to an all cash merger valued at $843M. After being initially rejected by the Connecticut regulatory board, the companies are still committed to the deal and are currently assessing what steps to take to complete the merger.

·      Following the acquisition of Deer Creek Ranch Water System in July 2018, the Texas segment has seen a year to date customer growth rate of 12%.

Headed into 2019, SJW’s revenue increased over the same period of 2017. The increase was primarily driven by scheduled rate increases in California. New customers were responsible for roughly $1M of additional revenue, while seeing healthy organic customer growth in Texas. A shining light in this geographic segment is the Canyon Lake water systems, which were acquired in 2006 and has since doubled its customer connections.

An outstanding concern is management’s mistakes related to the merger proposal with Connecticut Water (CTWS). After beating out bids from another New England based utility company, Evsource Energy, with a cash deal valued at $843 million the local regulatory authority rejected the original plans. SJW withdrew the application, but both CTWS and SJW are committed to reapplying for the merger after meeting PURA’s concerns. Acquiring Connecticut Water has the potential to bring over 140,000 customer connections to their current number of roughly 250,000 customer connections bringing geographic diversity as well as exposure to different regulatory authorities.

SJW is poised to capitalize on the growth it is experiencing in Texas and is expecting to generate in New England by acquiring Municipal Utility Districts and privately held water lines in nearby localities.

The third-quarter earnings for SJW were a surprise beat at $1.08 per share. Furthermore, San Jose Water is expected to increase its annual dividend for the 50th consecutive year by 7% to $1.20 per share.

Over the past 52 weeks, SJW has posted returns of 11.6% from a low of $51.26. While the stock saw a large decrease at the end of 2018, SJW has clawed a portion of those losses back with room to run. Q4 earnings for 2018 will be announced on Feb. 20th, 2019. Earnings are expected to be lower due to increased operating costs and additional expenses coming from merger activity. SJW has closely followed the Russell 2000 (Figure 1) especially during the sell off at the end of 2018. During the first two months of 2019, SJW has been performing better than the index. 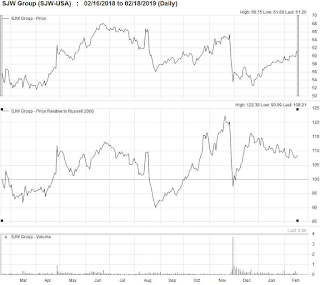 There is huge potential in SJW’s pending merger with Connecticut Water. If the companies can overcome the regulatory hurdles to close the deal, SJW’s geographic reach will enable it to acquire a vast array of other municipal water systems. While the deal not playing out is a real possibility, it wouldn’t be the end of the world with management even suggesting a share buy back of around $350M that will surely drive the price per share up. The water utility industry is ripe for consolidation, and SJW’s strategic plan allows it to do just that. The firm’s success in Texas proves it has the right process to successfully implement new systems into its existing infrastructure. I recommend that we hold our position in SJW and see how the regulatory battle plays out.