Spring break is finished and it is time to focus on the U.S. economy! Cyclical downturn or secular stagnation?

Former Treasury Secretary and Harvard economist, Larry Summers, has generated considerable discussion by stating that the U.S. is about to enter  a period of secular stagnation and he warns that low interest rates may be signaling that this is a serious economic problem.


Spring break is over and its time to get serious about the U.S. and global macro-economic outlook – which is not rosy.

The estimated GDP growth rate for Q1:2019 in the U.S. is currently much weaker than forecasted just a few months ago.  Is this just weather-related or is it the beginning of a cyclical decline?

It's neither according to former Treasury Secretary and Harvard economist, Larry Summers. He has recently generated considerable discussion by stating that the U.S. is about to enter  a period of secular stagnation and he warns that low interest rates may be signaling the beginning of this serious economic trend.

In a recent article by Summers and Lukasz Rachel ( “Public boost and private drag: government policy and the equilibrium real interest rate in advanced economies” BPEA Conference Draft, Spring 2019) they conclude that real interest rates would have declined by far more than what has been observed in the industrial world (see Figure 1 below) and would in all likelihood be negative if not for aggressive monetary and fiscal policies. 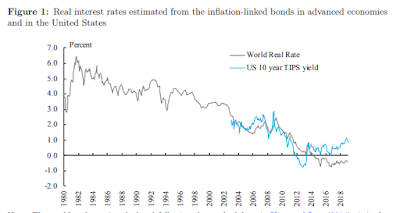 Summers in recent interviews has suggested that if secular stagnation is to be avoided in the years ahead it will take serious Keynesian stimulus (i.e. infrastructure spending) by the central government to offset the falling rates of private investment in the U.S. He also has been noting the falling productivity growth rates citing this as also leading to long-term economic stagnation. 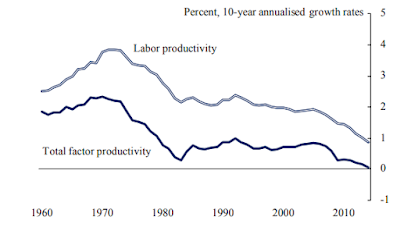 Summers and Rachel conclude that to avoid a long period of secular stagflation that this should become an urgent priority for governments and that they need to find new sustainable ways of promoting investment to absorb the large supply of private savings and to devise novel long-term strategies to rekindle private demand. They have suggested infrastructure spending could boost overall economic activity within the U.S. in much the same manner that the interstate highway system and the space program did in the 1950's and 1960's.

Gross domestic product (GDP) is a key indicator of economic activity, but the official estimate is released with a delay. The Atlanta Federal Reserve Bank’s  GDPNow forecasting model provides a "nowcast" of the official estimate prior to its release by estimating GDP growth using a methodology similar to the one used by the U.S. Bureau of Economic Analysis.
GDPNow is not an official forecast of the Atlanta Fed; rather, it is best viewed as a running estimate of real GDP growth based on available data for the current measured quarter. There are no subjective adjustments made to GDPNow—the estimate is based solely on the mathematical results of the model. 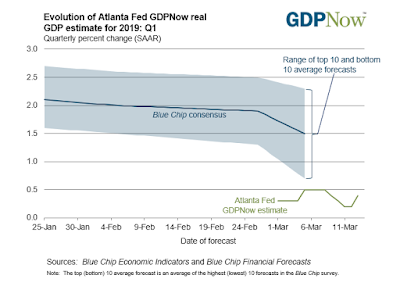 The GDPNow model estimate for real GDP growth (seasonally adjusted annual rate) in Q1:2019 is 0.4 percent on March 13, up from 0.2 percent on March 11 – and well below the 1.5% estimate by the Blue Chip consensus. After reports on durable manufacturing and construction spending were released by the U.S. Census Bureau this morning, the forecast of first-quarter real gross private domestic investment growth increased from -2.9 percent to -2.4 percent, and the forecast of first-quarter real government expenditures growth increased from 1.7 percent to 2.5 percent.

The Federal Reserve Bank of New York also reports a similar forward estimate of  GDP growth (referred to as Nowcast). This report is updated each Friday to reflect the impact of new data on its forecast. 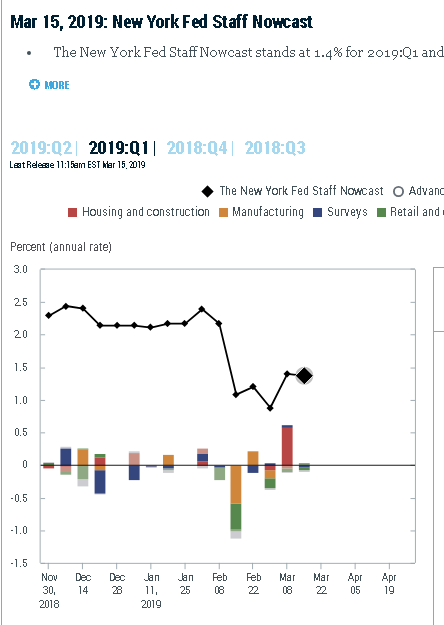 Citi tracks a measure known as the "economic surprise index" for various locales, which shows how economic data are progressing relative to the consensus forecasts of market economists.
News from around the global economy continues to disappoint, and Citigroup’s global surprise index, which measures whether data exceed or fall short of forecasts, has dropped through its 2018 low to the weakest since 2013. 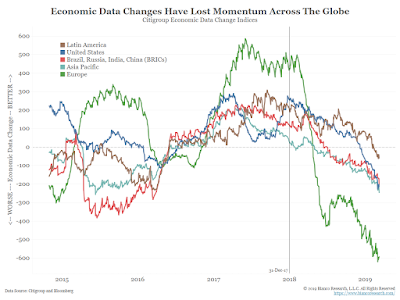 The latest move lower comes on the back of gloomy manufacturing numbers from the euro area, Japan and China.  The following table shows the weakening EU economic outlook.

The next several weeks will help determine whether this is the beginning of a cyclical downturn - or worse - whether it is the continuing trend toward secular stagnation that Summers wrote about recently.