Using GDELT: What are the key 'FinTech Topics' and how do they trend across time? by David Krause AIM Program Director, Marquette University

GDELT is a powerful tool that helps evaluate the level of interest and tone/sentiment of key search terms.

GDELT is used in this article to identify what are the key 'FinTech' Topics and how do they trend across time? 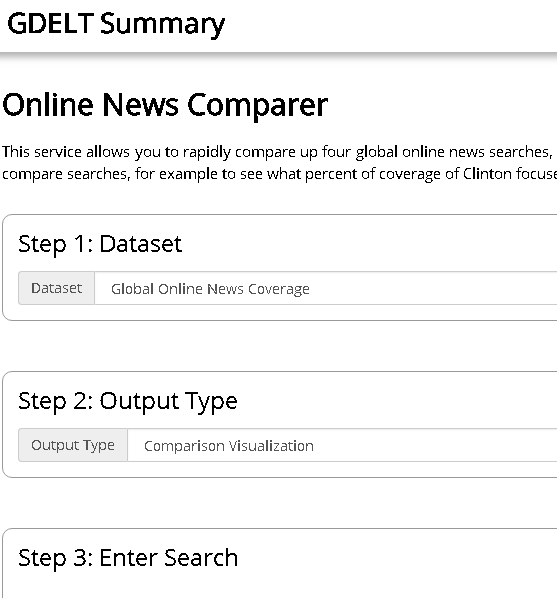 The Global Database of Events, Language, and Tone (GDELT) was used on this research. GDELT is a data set that is available on Google Cloud Platform. This free, public-access version of GDELT includes data from 2017 to the present and is available in a tab-separated value format using a CSV extension.

Referred to as the global database of society, GDELT is supported by Google Jigsaw and is used to monitor the world's broadcast, print, and web news from nearly every corner of every country in over 100 languages. Similar to Google Trends, it identifies the people, locations, organizations, themes, sources, emotions, counts, quotes, images and events driving the global society every moment of every day, creating a free open platform for computing on the entire world. It is a tool being used in Dr. Krause's FinTech Topics course taught at Marquette University.

Using GDELT, this article focuses on the key topics and trends within FinTech since January 2017. This research was originally conducted in October 2018 utilizing Google Trends and initially was done to help create the curriculum utilized in Krause’s FINA4931: Topics in FinTech - the course that is being taught during the spring 2019 semester at Marquette University. 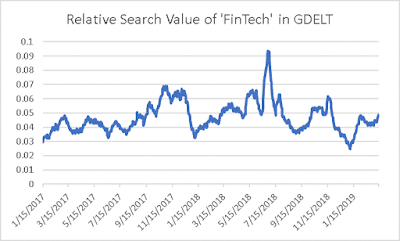 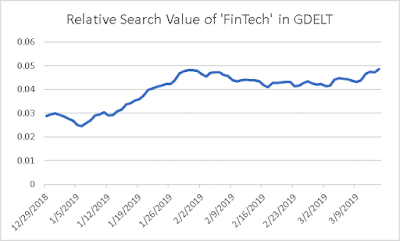 As displayed above, FinTech Internet searches (relative level of interest) have been relatively the same since January 2017; however, search volume has increased in early 2019. These GDELT searches are global in nature and conducted in the English language.

What are the key FinTech Topics and how do they trend across time? The following chart displays relative search over time (a commonly used Internet metric based on search interest). Not surprisingly, interest in blockchain spiked in early 2018 as bitcoin and other cryptocurrencies burst onto the financial scene. 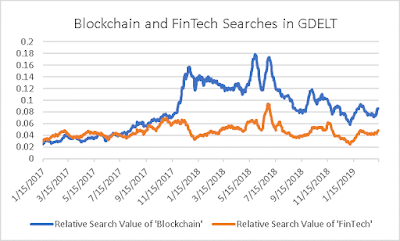 Looking more closely at the popularity of bitcoin and cryptocurrencies in 2018, the next chart displays the spike in the relative searches and articles published over time. Since the rapid price appreciation of Bitcoin and other cryptos – and the subsequent decline in the price of cryptocurrencies, the level of interest has flattened out in 2019 to levels similarly seen in 2017. 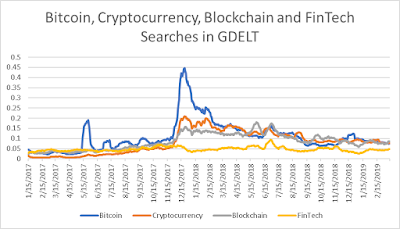 The chart below shows the overall relative interest over time of 'big data' – which is relatively greater than the other FinTech topics. While there was strong interest in ‘big data’ during the summer of 2018, this interest was likely related to various news stories about Cambridge Analytica and Facebook that commanded global coverage and interest. 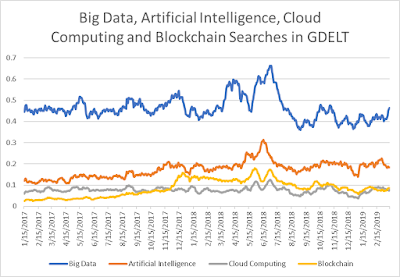 Next, the current market environment since the beginning of 2019 was examined for the four key FinTech topics (big data, artificial Intelligence, cloud computing and blockchain). The chart below shows the overall relatively strong interest over time of 'big data' – which remains relatively larger than the other FinTech topics. 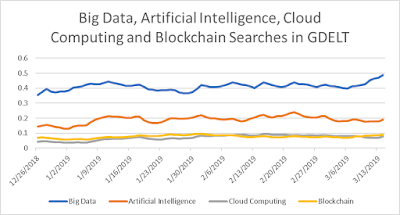 The chart below shows the overall relative search interest over time and the tone or sentiment of the term ‘big data’ in GDELT since 2017.

Traditional sentiment analysis tools tend to report average tone as a single number at a point in time with programs loaded with linguistic dictionaries that are used to skim articles for coverage that can vary from negative to positive sentiment.

GDELT evaluates an entire article for tone and sentiment (with higher scores being associated with more positive tone) – rather than just evaluating single words or phrases. Reducing millions of matching articles to a single sentiment number that can be tracked across time can be helpful, as in this case it can show that the tone towards articles about 'big data' tend to be positive and skewing higher in 2019. 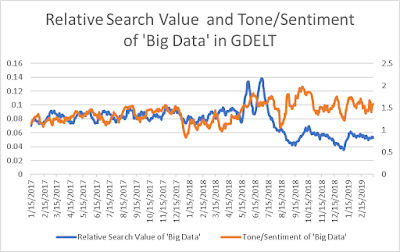 The GDELT histogram of the tone for 'big data' since 2017 shows a positive overall sentiment towards the search term – with the average tone over the time period of about 1.25 (0 is a neutral reading). Recently, the sentiment term has been trending upward and toward 1.50.

So how does the search term ‘FinTech’ stack up across time in terms of overall relative search interest and the tone or sentiment of the term?

FinTech has had a positive and higher sentiment score across time, except for the period in the third quarter of 2017 when various news stories North Korean ‘hacks’ and several large-scale data security breaches occurred and were heavily covered by the news media.  This period also coincides with the time when relative interest in the term 'FinTech' was the highest.

The histogram for FinTech tone/sentiment averaged about 2.0 during the period from 2017 to the end of March 2019 - which is a positive reading. 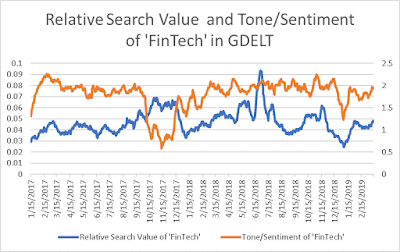 The results for the most recent period since 2017 for the term ‘Financial Institution’ is not as positive. The overall tone or sentiment of financial institutions has been near zero for much of the time period studied. Again, the chart shows that when negative news about a term occurs, the sentiment index tends to falls. 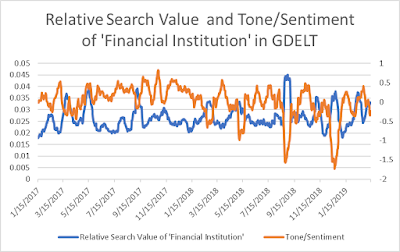 The purpose of this research was to utilize GDELT to help answer the questions: What are the key FinTech Topics and how do they trend across time? The charts displayed the relative number of articles and interest over time – as well as the tone or sentiment of various key terms.

Summary: The overall current market environment was evaluated for several key FinTech topics (big data, artificial Intelligence, blockchain, cloud computing and financial institutions). The results showed the overall relative interest in 'big data' to be the highest – and it also showed spikes in interest in blockchain / bitcoin / cryptocurrencies in early 2018 (as well as the subsequent fall in interest).

The results also showed a favorable sentiment regarding the term ‘FinTech’ and the relatively low tone/sentiment with financial institutions. This type of research helps with curriculum preparation and also identifies areas of future research.