Inogen, Inc. (INGN): Is this Portable Oxygen Firm Headed to the Stratosphere?"
By: William Pink, AIM Student at Marquette University

Key Points: Inogen, Inc. recently released an impressive fourth quarter and full year 2015 numbers. The company needed a strong fourth quarter after missing earnings in the third quarter causing the stock price to drop significantly. Management has had some concerns about the company’s rental revenue and how they will expand upon that number. The fourth quarter saw a 0% increase in revenue from the third quarter, but this has been expected since the upcoming additional Medicare rental reimbursement cuts in 2016.

The direct-to-consumer sales channel of the business was the fastest and largest source of revenue for the company. Management has placed an increased emphasis on their business-to-business and direct to consumer sales channels because they have accepted that their rental channel will not see any significant increase in the near future. The company has hired additional sales force personnel to expand upon their sales channel specifically to aid in the strong demand from their European partners.

After posting impressive numbers for the fourth quarter, the company has updated their financial outlook for 2016. Revenue is now expected to range from $187 to $191 million compared to the previous expectations of $177 to $183 million. Net income is expected to be from $12 to $14 million, a 3.6% to 21% increase from 2015. A modest improvement for a growing company, despite being amidst a reimbursement cut in one of their primary business channels.

What has the stock done lately?
After fourth quarter earnings were released Monday March 14, 2016 after markets close, the stock increased by 17.79%. This was a sign by investors that they were pleased with the numbers Inogen, Inc. posted and where the company has themselves positioned heading into 2016.

Past Year Performance
Over the past year, the stock has reached the stock’s career high of $54.85 in mid September after beating second quarter expectations. However, the stock dipped back down to where it started 2015 in the $33-36 range. The stock has seen an increase over the past month after hitting their year low of $29.48 and after fourth quarter earnings release the stock climbed back up to $42.00. 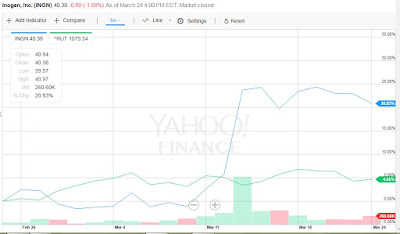 
The fourth quarter posted by Inogen, Inc. was extremely impressive given that their rental revenue was stable. This was an important quarter for both the company and investors and management needed to prove that they knew how to build revenue and expand the business even if revenue from the rental channel was not going to increase.

Inogen has taken a strategic approach over the past couple quarters by adding sales personnel to increase their business to business channel along with their business to consumer channel. The company should continue to see increase in both channels in 2016 and expand upon their international exposure through their European partners.
Posted by AIM Program at 7:18 AM