• Total’s revenues are under pressure due to the recent slump in oil prices.

• Management has indicated that it will continue to cut down costs in order to mitigate the current commodity environment.

• Frank’s has experienced a steep decline in EPS in 4Q15 compared to its performance from 4Q14. It’s anticipated that if the oil producers continue to pump at low prices, earnings could contract as much as 50% for the following year.

• If the oversupply of oil and gas continues, FI could be heading to new 52-week lows as producers are cutting down costs.

Key points: The Energy & Equipment industry is by nature very cyclical and influenced by the upstream industry. Further, its mature and fortunes are directly tied to the general economic activity that drives energy demand. Frank’s International continues to be a solid position in the AIM International Equity Fund as its not as directly exposed to commodity prices as producers are.

Off a slow start to the year, FI looks to rebound from what appears to be a relatively stabilizing commodity environment. Management has attempted to lower their cost structure by minimizing capital spending and improving working capital. Also, Frank’s has cut their workforce by 20% and reduced inventory by 25% since 2014.

On February 29, 2016 FI announced results for fiscal year 2015 and 4Q15. For the most recent quarter, Frank’s revenues were down -15.4% from the previous quarter. Further, international revenues were down -36.8% YoY. For 2015, global exploration and production spending and rig count declined 23% and 44%, respectively, while FI revenues were down -15.4%. This proves Frank’s has maintained a strong position among its competitors. As a highlight, cash flow from operations for 2015 was +16% YoY due to FI’s cost cutting campaigns. The recent earnings report met analyst expectations at $0.10 EPS.

Following the most recent earnings announcement, Frank’s CEO, Gary Luquette, announced that the attributes their revenue decline to their customer response to lower oil prices. Producers have responded by stacking rigs and reducing spending on projects worldwide. Looking at 2016, management is hoping to grow their market share through innovative technologies and the anticipation of an industry recovery.

Although Frank’s earnings have declined, they still maintain a strong market share of 23% in the Energy and Equipment industry. In addition, the company has gained market share in Mexico and Europe over the last year. The company is reviewing over 50 M&A opportunities in more than 10 well related products and services—specifically, FI aims at displacing financially weak competitors in Brazil and the Middle East.

What has the stock done lately?
Recently, the stock has shown volatility as the rest of the industry. The stock was off to a rough start for 2016 as oil hit a low point of $26.20 in early February. The stock has rallied since and was up +8% for February and +13.44% so far in March. This has helped investors regain their confidence; however, the company must continue to make use of their efficient fleet in order to maintain market share and guarantee investors’ confidence.

Past Year Performance: Over the past year, the stock has decreased by -12.33% in market cap value. Although the headwinds surrounding the industry have affected Frank’s, the company has outperformed the industry thanks to its limited exposure to commodity prices. The company’s strong balance sheet and position in a challenging environment set FI for strong performance moving forward. 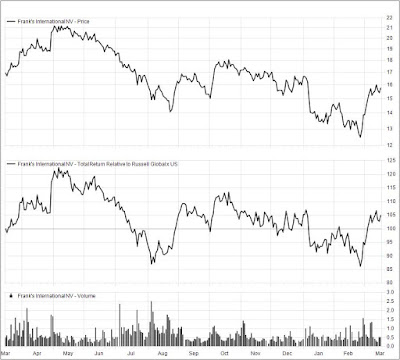 Frank’s has solidly mitigated the headwinds surrounding the industry caused by the collapse in oil prices. The company continues to outperform its peers as it has taken advantage of potential market entry points such as Mexico and the Middle East. Further, management aims at expanding to offshore shelf and international onshore opportunities in underrepresented markets.

FI intends to continue the balance between domestic and international exposure in order to hedge against international currency risk and macro economical conditions. FI’s 52-week range of  $12.34-$21.50 indicates a stable performance relative to its industry peers. 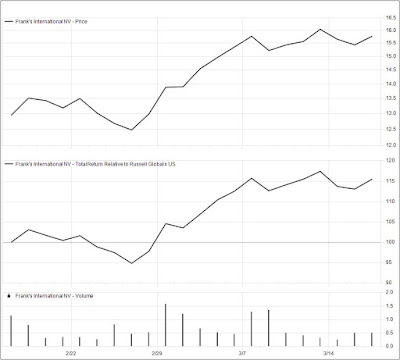 Source: FactSet
Posted by AIM Program at 11:15 AM