Jim Bianco talked on CNBC yesterday about the Fed's decision 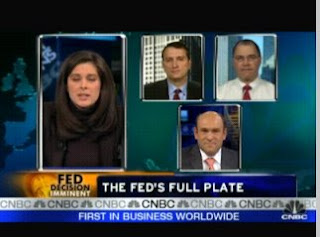 Jim is not a fan of the "good bank / bad bank" model. He will be appearing at the AIM Forum on Friday, January 30, on the Marquette campus. Jim is a 1984 Marquette grad.
Posted by AIM Program at 8:21 AM 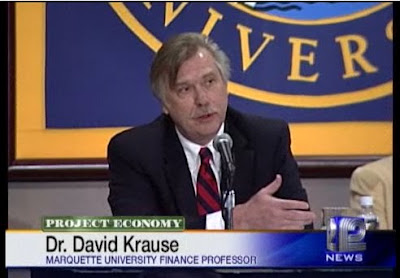 The Marquette University Economic Leadership Forum was held on January, 27. A WISN-TV news clip of the event can be viewed at:
http://www.wisn.com/video/18579647/index.html?taf=mil

The experts provided insights on the economic challenges and opportunities that face Americans in the year ahead - locally, nationally and globally. There was a considerable variation in the viewpoints of the panelists. Dr. Krause was more pessimistic than the others about the likelihood of an economic recovery in 2009.

Dr. Krause referred to Dan Fuss' metaphor about the U.S. economy experiencing a strong hurricane. He indicated that the second half of the storm will be felt in 2009 with the consumer spending well below recent levels.

He said, "Even with lower mortgage rates and softer housing prices, the tighter credit standards and loss of confidence suggest to me that home prices have further to fall in 2009 and that the consumer will be AWOL. I say this because I believe homeowners, on average, have used their houses as retirement accounts and as ATMs. Many Americans have taken out second mortgages and home equity lines of credit to finance excess consumption. They cannot do this because of tightened credit conditions and a deterioration of housing prices. With 401ks at 60% of where they were a year ago and the job uncertainty, I see the consumer cutting back dramatically."

Morningstar research shows equity returns in 2008 (and for the past 3 and 5 years) for stocks with wider Morningstar Economic Moat ratings and higher Stewardship Grades had higher returns. Economic moats and corporate stewardship are topics that we are currently discussing in the AIM courses (FINA 191, 193, and 194).
Posted by AIM Program at 4:29 PM 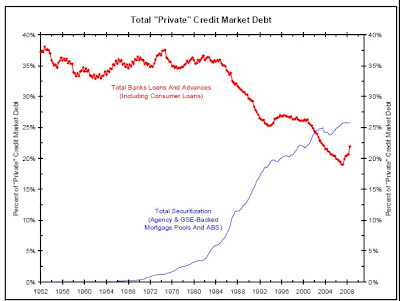 Jim Bianco of Bianco Research addressed the issue this week. He said, "The banks are lending. The problem is we have unrealistic expectations." As the chart above shows, securitization has accounted for a larger part of credit creation than bank loans. He says, "Bank lending was not the biggest creator of credit over the past few years. The marketplace is asking the banking system to instantaneously double is its credit creation capacity. It cannot." He asserts that we should address the problems with securitization and not expect banks to more than double their level of loan creation - especially during the economic downturn.
Posted by AIM Program at 12:29 PM

The 2nd Annual AIM Investment Forum will be held from 3-5 pm on Friday, January 30, in the Weasler Auditorium. The AIM Forum will be conducted in a format similar to the Davos World Economic Forum allowing for audience interaction with the guests.

Preceding the event will be equity presentations from the AIM students in the Class of 2009. The presentations will also take place in the Weasler Auditorium and will start at 1 pm and continue until the start of the Forum.

For more information and to RSVP, please e-mail Lee Hovorka at: lee.hovorka@marquette.edu
Posted by AIM Program at 8:21 AM

Jeremy Siegel, a finance professor at the Wharton School at the University of Pennsylvania, talks with Bloomberg's Rhonda Schaffler about the U.S. financial industry. To view click on the title above or go to: http://www.bloomberg.com/avp/avp.htm?clipSRC=mms://media2.bloomberg.com/cache/vypaY0D7OnoM.asf
Posted by AIM Program at 7:59 PM 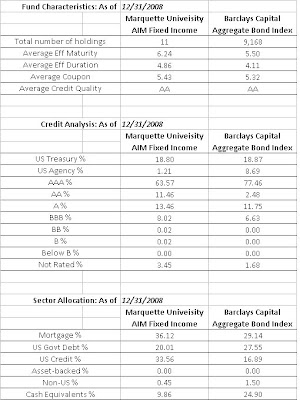 The AIM Fixed Income Fund deviates from the BarCap Aggregate Bond Index in the following ways: 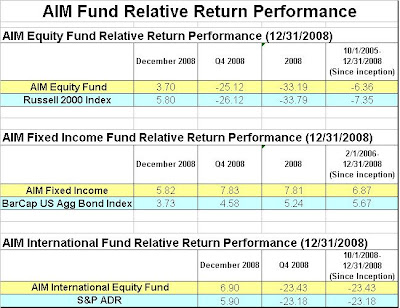 The AIM students will again be attending the R.I.S.E. IX Forum from March 26-28, 2009 at the University of Dayton. This will be the fourth year that Marquette AIM students and Dr. Krause will trek to Dayton, Ohio, for the Forum.

Renowned leaders from the investment industry will explore the economy, markets, Federal Reserve policy, corporate governance and responsibility, and global issues and opportunities during the Forum. In addition, R.I.S.E. will include specialized breakout sessions, workshops, career strategies forums, academic program development and an optional portfolio competition. AIM students are planning on entering their equity and fixed income portfolios in the competition.

Additional information is available at: http://udrise.udayton.edu

A copy of the R.I.S.E. IX Brochure is available at: http://udrise.udayton.edu/AcademicBrochure.html

A video press release of the R.I.S.E. Forum can be viewed at: http://udrise.udayton.edu/video.html 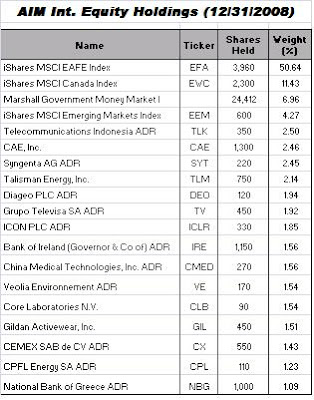 As of the end of 2008, the International AIM Fund has added 15 stocks - in addition to 3 international ETS. It is expected that by the end of the spring 2009 semester that the fund will be fully loaded with international equity securities recommended by the AIM students.

The table above contains the current International AIM Fund holdings as of 12/31/2008.
Posted by AIM Program at 9:44 AM

Since inception (January 2005), the AIM Fixed Income Fund is ranked in the 9th percentile out of 126 peer group US Intermediate-Term Bond Funds according to Morningstar Direct.

Recently the AIM Program was featured on PBS' Nightly Business Report. The post can be found clicking on the title above or by going to:
http://www.marquette.edu/omc/newscenter/video_nbr.php

Dan Fuss has over 50 years of experience in the investment industry and has been with Loomis, Sayles & Company since 1976. He is Vice Chairman of the firm and manages numerous institutional accounts for the fixed income group. Dan also manages a variety of mutual funds including the flagship Bond, Strategic Income, Institutional High Income and Investment Grade Bond Funds.In 2000, he was named to the Fixed Income Analysts Society’s Hall of Fame in recognition of his contributions and lifetime achievements in the advancement of the analysis of fixed income securities and portfolios. He is past president of the Boston Security Analysts Society. Dan earned a Bachelor of Science and Masters in Business Administration from Marquette University.

Dan Fuss recently spoke at the CFA Society of Milwaukee luncheon. One of the most successful fixed income investors, he is especially keen on the ethics component of the CFA Program's course of study. See the CFA viewbook to read about Dan's comments on the value of the CFA charter: http://www.cfainstitute.org/cfaprog/utility/flash/viewbook_fuss.html. 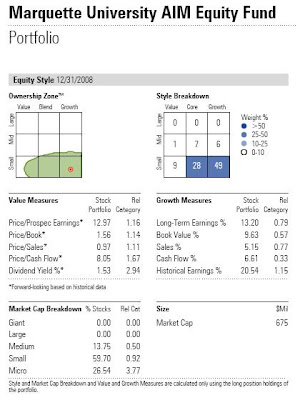 The AIM Equity Fund (small cap) has tilted toward growth stocks since its inception in September 2005 - despite its 'sector neutral' weighting mandate. As of the end of 2008, almost half of the holdings in the AIM Equity Fund were classified as growth stocks according to Morningstar (see Style Breakdown chart). Given that the benchmark (Russell 2000) and the investment policy statement are small cap blend or core orientated - the relevant questions are:
1) Is this a concern given the benchmark and IPS?

2) Why do you think that the AIM Equity Fund has had a consistent small cap tilt?

3) What, if anything, should be done to bring the fund into balance?

Interestingly, the AIM Equity Fund has a 0.93 beta relative to the R2K and a significantly higher dividend yield -- hardly 'growth' type measures.

Please feel free to voice your thoughts and opinions about this issue. The AIM students in the Class of 2009 and 2010 will be watching and also weighing in on this topic; however, we are interested in hearing from the AIM alumni and other viewers of this site.

The following MP3 audio file is an overview of Marquette University's Applied Investment Mangement (AIM) Program. This 5 minute overview is also available as a podcast which can be obtained with most RSS readers (such as Google Reader or iTunes).