The Toronto-Dominion Bank (TD, $55.87): “Retail Banking is Better With Syrup” 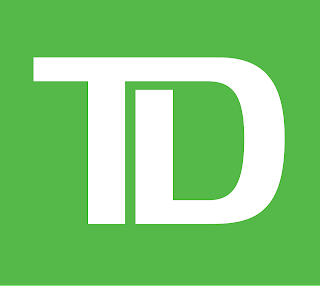 
• Since TD operates mainly in Canada, it is held to strict regulations regarding the amount of risk the firm is allowed to take. As a result, TD is under scrutiny for its current level of leverage and liquidity.


• TD applied for a blockchain patent to digitally track assets at the beginning of April. TD believes this is the future of finance and intends to incorporate it into their banking systems.


• Senior Executive Colleen Johnston has announced her retirement after 14 years with TD. Her career spanned three decades and saw her take positions with TD as Group Head of Direct Channels, Technology, Marketing and Corporate & Public Affairs.


TD operates predominately in Canada which subjects them to more scrutiny of their liquidity than other countries due to the financial regulation. Due to this scrutiny, they facilitate notably lower percentages of loans than the average bank. Toronto-Dominion Bank’s loan to deposit level in 2017 was 75.27%, significantly lower than the industry average of 90%. As a result, TD is lending out less than its total level of deposits compared to the industry. While this number has consistently declined year over year, posting a 5 year average of 79.14%, this may be a key part of their success. Consistently keeping a lower loan to deposit ratio has allowed them to remain relatively liquid, making them one of the safest multinational banks to invest in. They consistently have cash on hand that allows them to invest into new projects such as financial technology.


TD submitted a patent application for “an apparatus for use in a digital asset tracking system that includes a storage device and a processor coupled to the storage device.” This device would be used to create decentralized ledgers that contain information about the assets under management as well as the value of transactions the bank facilitates. The eventual goal of the blockchain technology is to reduce the risk of having a centralized ledger where information can be more readily accessed by criminals, as well as increase the speed of data processing. The application states that the technology “makes the system fairly robust in comparison to centralized server systems by allowing multiple distributed networks to verify the contents of a single ledger”. TD was listed as one of the top 10 companies investing in blockchain, indicating they believe that it is the future of the industry.


Colleen Johnston has announced her retirement from TD after 14 years with the firm. This is a notable retirement as she was a major part of the company; Colleen was CFO from 2005 to 2015, guiding them through the financial crisis as well as facilitating the banks expansion in North America. In addition, over the past two years she was a major part of the banks technology capabilities and digital customer experience. The incorporation of blockchain was facilitated through her office. As a result of this retirement, the senior executive team has undergone major changes in roles until they can find a replacement.


Over the past three months, TD’s stock price has steadily declined 7.75% from $60.20 to where it currently stands at $55.87. While this may be a significant decline, the stock has done well in the medium term; TD has increased from $36.65 in the past two years (52.44%). In addition to this increase, the company posted an EPS of $4.21 in 2017, slightly beating expectations. TD announced they will begin trading ex-dividend on April 9th. The stock will pay a dividend of $0.519 per share on April 30th to shareholders who purchased TD prior to April 9th.


Past Year Performance: TD’s stock price has dropped 5.02% in value over the past year, but that may be more of a result of volatile markets than company performance. Net Income in 2017 grew to $7,946 million, up 19.5% from 2016. The amount of loans facilitated increased by 7.94% and the amount of deposits increased by 10.26%. They paid dividends of $1.80 in 2017 (10% increases from 2016). Their financial statements indicate strong growth in all aspects, a trend investors will be rewarded by in the long term. 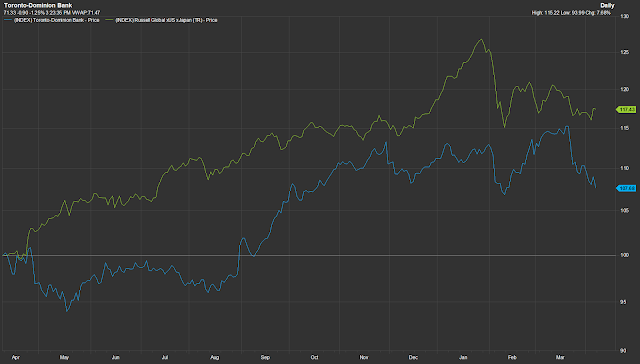 
Despite Toronto-Dominion Bank’s recent stock price drop, all signs show positive growth. The company consistently posts strong financial statements that show investors that the firm is a major player in the financial industry. The company’s recent investment into disruptive technology shows that they are focusing on long term development and intend to capitalize on changes in the industry. The stock produces a consistent dividend stream; TD’s compound annual dividend growth rate over the past 20 years is higher than 10%. Due to the strong financials, consistent dividend stream, and growth into emerging technologies, I recommend TD as a strong buy.
Posted by Marquette AIM at 8:23 AM