• Bank of the Ozarks, Inc. (NASDAQ:OZRK) provides regional banking services in the Southeast Portion of the country with over 250 branch location spanning across ten states.


• OZRK is well positioned to benefit from the upcoming rate hikes as 79% of their originated loans have variable interest rates.


• While the banking industry is very competitive, OZRK’s 38% efficiency ratio makes it one of the most efficient banks in the country and justifies a premium for the stock.


• The implementation of tax reform in the United States should help prolong the current bull market and drive strong deposit and loan growth for the year.


• OZRK should be returning to their 52 week high as the stock stands to benefit from favorable macroeconomic conditions and their large concentration of variable interest rate loans.


Key points: Economic conditions are very favorable to regional banks and Bank of the Ozarks is expected to continue to be a leader in this industry. In 2018, the bank was awarded Top Performing Regional Bank with assets between $5 billion and $50 billion by S&P Global Market Intelligence. This marked the eighth consecutive year in which Bank of the Ozarks has been awarded as a Top Performing Bank. Consistently being recognized as an industry leader is a strong testament to the ability of CEO George Gleason, who owns 4.5% of outstanding shares and has been with the company since 1979.


Currently, Bank of the Ozarks has 79% of their loan portfolio tied to variable interest rates which stands to be a major driver of profitability. The Federal Reserve has increased the Fed Funds Rate once this year with two more rate hikes expected for 2018 and three more rate hikes expected next year, Bank of the Ozarks should experience a steep increase in the yield on their outstanding loan portfolio.


Additionally, management signaled in their most recent earnings call that they expect their efficiency ratio to improve to under 35% during the year. This improvement in efficiency signals that the bank expects to experience increasing margins in 2018 leading to higher profitability. An increase in loan and deposit growth resulting from the new tax policy paired with improving margins puts Bank of the Ozarks on track to continue to be a top performing regional bank.


Year to date, Bank of the Ozark’s stock has fallen by ~3.8% after falling significantly in March. During April, the stock has been fluctuating between $48.50 and $46.00. Recently, the price is beginning to trend upward again following an earning call in early April. Despite recent volatility in the stock, Bank of the Ozarks is expected to return to their 52 week high as a result of future rate hikes and the continuation of strong economic conditions.


Past Year Performance: During January 2017, the stock reached an all-time high before falling sharply in March. Over the past year, the stock is down ~2.1%. While the stock has not moved significantly this year, Bank of the Ozark’s valuation multiples have decreased considerably implying the stock is trading at discount to its historic valuation. These multiples are expected to return to previous levels driving a higher valuation. 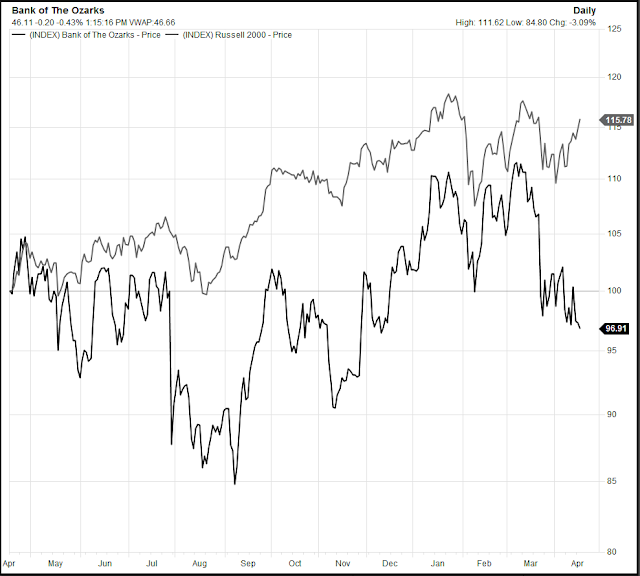 
Bank of the Ozarks is a strong play moving forward and should begin to see a higher valuation in the latter half of 2018. The stock is expected to experience higher growth from tax reform and strong national economic conditions. Additionally, their loan portfolio is poised to benefit from a series of rate hikes leading to higher profitability. These factors should lead to the return of historical valuation multiple and a higher stock price. Looking ahead, Bank of the Ozarks should begin trending toward its all-time high from 2017 sooner rather than later. 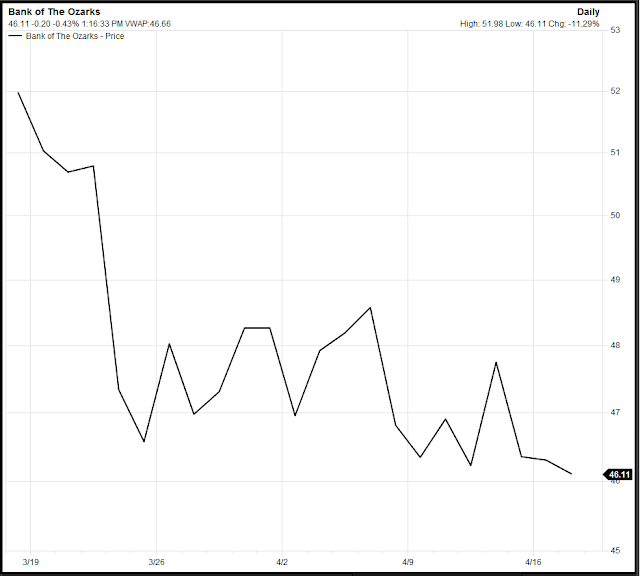 Source: FactSet
Posted by Marquette AIM at 8:28 AM