·         PNM Resources Inc. (NYSE, PNM) is a utility company that provides the generation, transmission, and distribution of electricity to its rate-regulated customer base.  The majority of electricity produced by PNM is through coal fired and gas fired power plants.  PNM operates primarily in New Mexico and Texas.  This firm was founded in 1917, and is headquartered in Albuquerque, NM.


·         PNM filed for a rate increase which was approved by the New Mexico Public Regulation Sector (NMPRC), awarding PNM rate growth of $61.2 million.


·         The EPA along with regulators in New Mexico approved the forced retirement of Units 2 and 3 at the San-Juan coal fired power plant.


Key Points: Moving into 2018, PNM Resources Inc. announced their plan to spend $2 billion in capital expenditures over the next 5 years.  Their current capex spending has hovered around $500 million a year so this spending plan would be a 20% decrease in expenditures moving forward.  PNM has stated that they plan to slowly transition into alternative energy from their coal-fired plants as clean energy initiatives begin to transpire.  PNM has not taken part in an acquisition of an alternative energy firm in the past six years making their statement to expand into renewable energy seem questionable.


The EPA along with the New Mexico Environment Department revised a plan for PNM to close electrical generation units in its coal-fired San Juan plant in New Mexico.  This plan also included the construction of a natural gas plant that would produce 78 MW of electricity to replace the lost generation from the coal units.  PNM states that they plan to continue to phase out their coal plants in favor of alternative forms of energy.


On November 28th, 2017 PNM Resources hit a price high of $45.53.  Since reaching its high, the stock price has declined 23% to date.  The utility industry has been struggling over the past couple of months as interest rates continue to rise.  Utilities rely heavily on debt financing because they are an asset intensive industry with large amounts of infrastructure that need to be built and maintained.  Value stocks like utilities also suffer because dividends are less attractive in a rising interest rate market.


Past Year Performance: Over the past year, PNM had a price increase of less than 1%.  While the stock made large gains over the course of a year, these gains were virtually erased with the rise of interest rates.  Over the past two months, PNM has experienced large amounts of price volatility which is not surprising considering the market as a whole has experienced this as well.  As these bond yields continue to rally, the sector as a whole will continue to struggle.  PNM has been closely following the Russell 2000 (Figure 1) in terms of the initial price drop, while the firm seems to be experiencing more volatility than the other stocks in the Russell 2000 over these past two months. 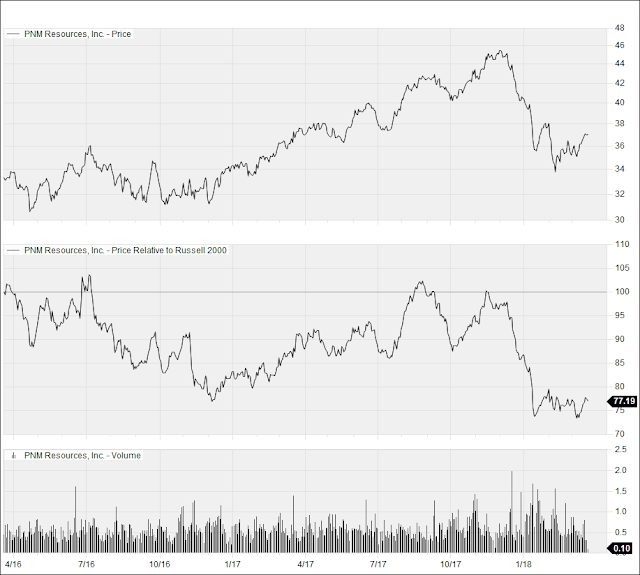 
PNM Resources has several areas of concern in regards to their future performance as a firm.  The largest issue that PNM faces is being a utility company that derives a large amount of their energy production through coal and other fossil fuels.  At this moment, coal has been relatively cheap which has benefited PNM.  In the long-term however, the US will continue to become more environmentally conscious and PNM could be at odds with the EPA and be forced to make large changes to their operations.  PNM has stated that they plan to move away from coal and into alternative energy, yet they have not built or acquired a renewable energy plant in the past five years.  They have also stated they plan on lowering capex expenditures in the future showing they are not planning on any large expenditures in the coming years.  In terms of the future, PNM has expressed a plan, yet have shown almost no signs of moving towards it.  PNM has reaped the gains of being a large electric utility, but because of their lack of adaption to a quickly changing marketplace, I do not see a positive outlook for this company.

Posted by Marquette AIM at 8:05 AM