• Even under unappealing macro conditions in the past, SUPV has performed well.


• The outlook for the macro economy of Argentina in 2018 and 2019 are very positive. New tariff adjustments are expected to normalize the high inflation rates in Argentina, while large investments by the private sector and an increase in exports to Brazil are expected to increase GDP to a sustainable 4% in the next two years.


• The financial services being offered are currently underutilized by the Argentinian population, giving SUPV a positive outlook for future growth.


Key points: Despite overly high inflation rates in Argentina, large amounts of fiscal deficit, and a recent drought causing harm to the food supply in Argentina, Mr. Ricard Arriazu, the bank’s economic advisor, has a positive outlook for the future macroeconomic conditions of Argentina. He expects to see 3-4% growth in key sectors including agriculture, energy and infrastructure in 2019 due to the large investments in in construction, machinery and equipment.


The current investments in construction are now primarily driven by the private sector, oppose to the public sector, which is a good sign for SUPV. Also, after April of this year, he expects inflation to decrease due to the newly adjusted tariffs on electricity gas and water. The recovery of the Brazilian economy should also increase Argentina’s exports (mostly auto and gas related goods), boosting the expected GDP to a sustainable 4%.


Mr. Supervielle, Chairman and CEO of SUPV, is excited about the future opportunities in the financial sector. The large major banks have made their imprint on this market, and are starting to consume more of the market space. They have started to outperform the majority of public entities. In total, he also feels that the financial services being offered are still not being used to their full potential. An example of this would be the lack of credit card users. In 2017, total savings accounts in Argentina amounted to almost 50 million while credit card users were only around 15 million. SUPV intends to take advantage of this large market space.


SUPV has focused their attention in 3 main areas when pushing for continued growth. The first of these is user experience, digitalization and talent management.


In the past 6 months, SUPV has saw a price increase of over 25%. When the economy took a down turn in February, the stock still saw an increase in price around 2%. This past month however, the stock is currently up and additional 5.01% and doesn’t seem to be slowing down


Past Year Performance: In Q4 of 2017, SUPV saw a 60% increase in net income YoY and 36% increase QoQ. SUPV’s net income grew 86% for the 2017 fiscal year. The price of this stock has seemed to be consistent with its phenomenal performance, growing 81.15% in the past year. 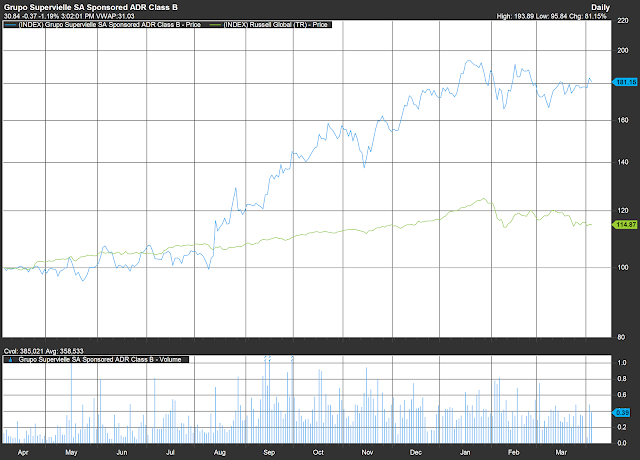 
Grupo Supervielle is growing at an exponential rate and they are consistently outperforming competitors and the market as a whole. Even when the macro outlook was as attractive as it is now, SUPV still performed at a very high level. With the 2018 macro predications getting even better I do not see SUPV slowing down. However, many of the positive factors mentioned are contingent on sound political practices which show some risks. Assuming the political conditions remain constant, SUPV is on track for another phenomenal year.