• ENV completed merger with FolioDynamix on January 2, 2018 – which was accretive and favorable to shareholders.


• Total revenue growth up 18% from 2016 – proving the 2015 acquisition of Yodlee despite initial shareholder backlash.


• Assets Under Management (AUM) accounts increasing for both client accounts and financial advisors using the technology platform. However, ENV needs to get a hold on costs.


• On March 30, 2018, at 3:00pm, nine executives and officers at Envestnet each disposed of equity in the company. This includes CEO, Chairman, and founder Jud Bergman as well as President Bill Crager. NO CAUSE FOR ALARM.


ENV’s acquisition of FolioDynamix proved to create value with shareholders as stock price climbed about 4% by the end of January 2018. FolioDynamix added trading tools and commission and brokerage support to ENV’s current portfolio of offerings. Technology and operations gained through acquisition will be applied to ENV’s wealth management business, increasing operating scale and efficiency and improving data analytic capabilities.


The story with this company does not deal with revenues. ENV has seen total revenues soar thanks to the Yodlee acquisition and organic growth in AUM fees. AUM accounts with clients have grown 23% and financial advisors using ENV’s platform have increased 11% in 2017. However, Net income has been negative the past two years. 2017 Gross margin for ENV is 20% compared to competitors Morningstar (MORN-US) and Cohen and Steers (CNS-US) of 55% and 48%, respectively. The costs of revenue for ENV include compensation and benefits to employees, which appears to be the biggest leach to this firm’s revenues. Despite this, investors should be aware that these ratios come from GAAP reported numbers, and ENV’s 10-K presents an adjusted net income of $60.6 million and $43.6 million for 2017 and 2016, respectively. Adjust net income should be taken with a grain of salt – it should be examined thoroughly.


A red flag to investors and shareholders may be when management of the company decides to sell off their own equity stake in the company. Yes, nine officers have disposed of portions of their stake. However, that does not make this event inherently bad. The stock price has been on the rise for the past couple of years, and officers in the company may be looking to harvest some of their earnings. After all, CEO Jud Bergman still retains more than 99% of his equity holdings prior to the disposal. Perhaps a vacation is in his future?


As mentioned earlier, the acquisition of FolioDynamix was received well by investors and the price increased throughout January. ENV beat on earnings by $0.01 when reports were released in February. The past three months have shown steady returns without any major price fluctuations. On December 29, 2018, ENV traded at $49.85. Today, March 30, 2018, the stock trades for $57.30.


Past Year Performance: When first added to the Small Cap portfolio, the price dropped more than 20%. Price bottomed at $19.30 when the stock was pitched at a price around $30.00. Since then, the stock has seen an overall upside of approximately 91%. ENV has increased by 91% YTD as well after climbing back from the price drop in 2015. Despite such a large return, the financial analysts covering ENV still show an average upside of 7% with a price target of $61.25. P/B for ENV is less than half of the industry average (5.11x Vs. 12.57x), so ENV can be considered a value play for investors. 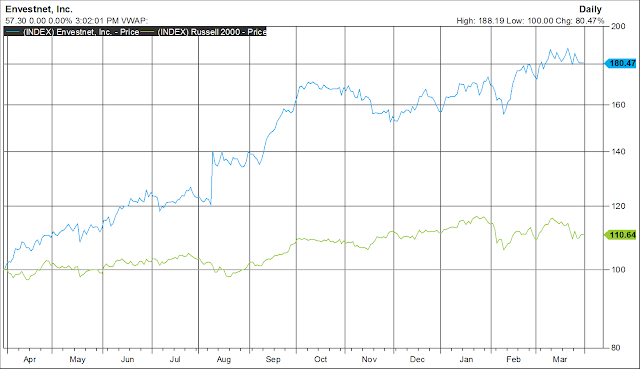 
After a year of such strong growth in financial performance and stock price, it is hard to know if there is any upside left in this company. Certainly, when an investment yields a 91% return, an investor should consider harvesting some or all the stake. However, the recent acquisition of FolioDynamix poses to generate more revenues and operation efficiencies for the company. Both companies have similar operations and should combine well to create a strong synergy. Despite the stock price sitting around the 52-week high, I believe the AIM Small Cap fund should continue holding its current stake in ENV to see how this acquisition plays out. Re-evaluation should be made each quarterly earnings report. 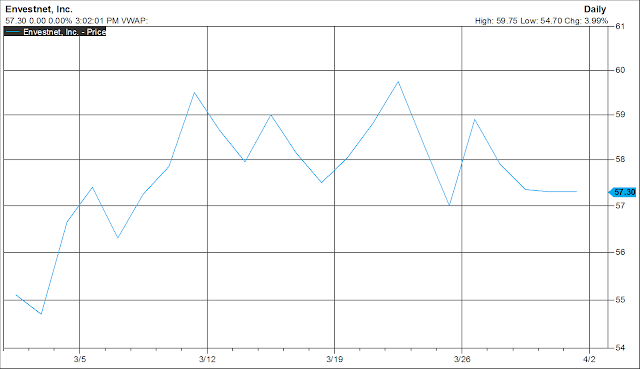 Source: FactSet
Posted by Marquette AIM at 8:08 AM