• NTES entered into collaborative operations with Tencent (TCEHY) for music licensing, increasing their content without expensive fees from primary sources.


• Potential risks outlined from 2017 are slowly coming to fruition in regard to market volatility and reliance on third party distribution.


• NETS is being sued by game developer, Playerunkown’s Battlegrounds Corp (PUBG), for copyright infringement and unfair trade practices for two of their mobile games, Knives Out and Rules of Survival.


• After seeing incredible growth in 2017, the stock price has plummeted in 2018 erasing all returns from LTM.


NTES announced that their cloud music operating segment has reached an agreement with Chinese tech giant, Tencent (TCEHY) in order ease licensing. It is reported that the two will exchange more than 99% of their premium content and collaborate in future operations according to Bloomberg. This would allow NTES to access new content without having to pay substantial fees for content, which we have seen other companies have to do such as Netflix and Spotify. The deal has the potential to increase NTES consumer market immensely given the size of Tencent and their influence on Chinese culture. Tencent’s own music operating segment has grown so immensely over the past two years, that there have been rumors that Tencent may break off their cloud based music segment and look to take it go public in the coming years.


In the initial write up for NTES, the risks mentioned were the potential of volatility and reliance on third party distribution. Volatility reentered the markets in the beginning of February and have not left since. Large cap international equities have been hit the hardest especially in Asian markets ever since Trump threatened a trade war with China. Both countries implemented their own tariffs, however in the past couple weeks tension has eased and the probability of a trade war has diminished greatly. In regard to third party distribution which NTES is highly reliant on iOS and Android, the decrease in smartphone sales has shown in the stock price as well. Apple has seen flatted growth in iPhone sales in recent years.


NTES’s game, Knives Out tops the world list of most downloaded games by generating $24 million in sales for the month of February. PUBG Corp. claimed NetEase’s mobile games Rules of Survival and Knives Out illegally copied crucial elements unique to PlayerUnknown’s Battlegrounds PC/Console game. The allegations highlight specifically the gameplay, art style, buildings, vehicles, weapons, clothing, landscapes were all mimicked to tee. Because of these allegations PUBG is suing for unfair trade practice, along with copyright infringement. What makes this lawsuit more intriguing are the rumors that, Tencent is attempting to gain a substantial share in PUBG. This would increase tension between the two companies, which as I mentioned prior, they recently entered into collaborative efforts in the music industry. Late last year, TCEHY purchased the remaining equity of Riot Games. The company also has investments in Activision Blizzard, Epic Games and Clash of Clans developed by Supercell.


Q1 of 2018 has officially brought volatility back into the markets. NTES has not been susceptible to this and has seen a -22.83% YTD return. Just in April the stock has dropped 7%, this could mainly be due to the lawsuit and decreased smartphone sales. Earnings season has not been positive for major tech companies so far. If earnings keep on coming up short, the entire industry could continue to fall. The S&P ADR index has seen a YTD return of -1.14% and a 1 month return of almost 4%.
Past Year Performance:


The 50-day moving average is now below the 200 day, signaling no momentum for the stock. Even though majority of international companies have suffered this year, NTES individually did not help themselves towards the end of the year. The company missed 2017 Q4 earnings by $0.43, a surprise of -23.1% according to Factset. This was their lowest EPS since June of 2015 that had seen tremendous momentum for the past two years. This has led to the company being at the wrong side of the 52-week H-L. 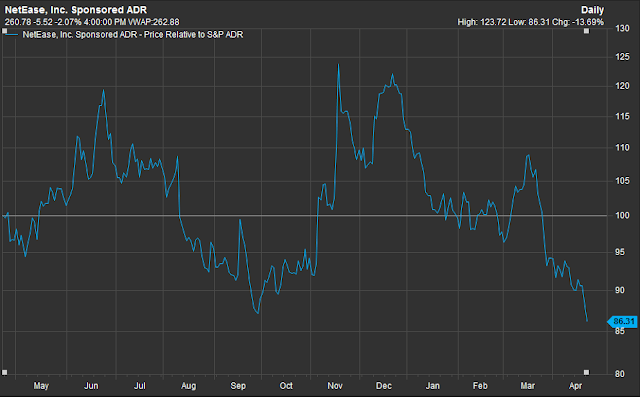 
NetEase has massive potential given that they’re in China and have positioned themselves to thrive in several operating segments within the IT industry. With their most recent operating segment, ecommerce, beginning to grow and gain popularity, this could lead to the company shifting its focus away from its main segment of video game development. That being said NTES would really have to find ways to differentiate themselves from the rest of the market given that their main competitors are some of the largest in the world i.e BABA, BIDU, and TCEHY. Even though the company has seen massive losses the past 6 months, nothing has changed fundamentally about the company. If the company can get back on track and not have as many delayed releases/developments with their video games, can continue to grow their e-commerce business segment, and are able to resolve this lawsuit with PUBG, I believe the stock will rebound along with the rest of the IT industry throughout the year. 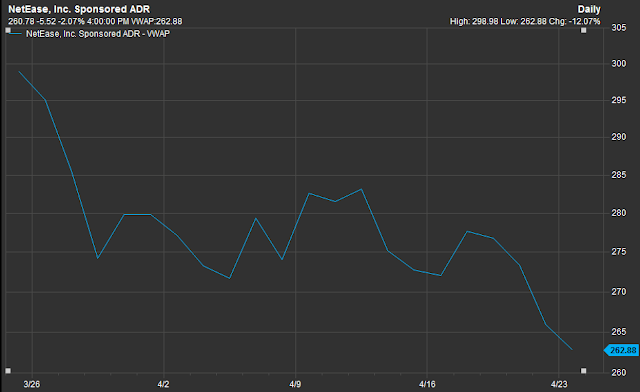