• Lululemon Athletica Inc. (NASDAQ: LULU) manufactures, distributes, and sells activewear and footwear for men and women through both brick and mortar stores and their ecommerce platform.  LULU has a global presence throughout Asia and Europe but brings in revenue primarily from the United States and Canada.


• LULUs goal of reaching $4B in revenue by 2020 remains attainable given strong sales growth leading to a 5-year sales CAGR of 14.1%.


• FY18 in-store sales growth declined from FY17, but Online sales growth (direct to consumer segment) more than made up for the decline, growing at over 27%.


• LULU continues to finance their operations without any debt and ended FY17 with $990.5M of cash and cash equivalents on their balance sheet.


Key points:
LULU reported earnings on March 27th and once again confirmed investors’ confidence in them.  Beating earnings by $0.06, and revenue expectations by over $17M, LULU remains well positioned to meet their initiative of $4B in sales by 2020.  Comparable store sales rose by 12%.


After relaunching their website during FY17, Lululemon saw significant revenue growth from their online segment.  While total net revenue grew by 13%, their online segment more than doubled this growth at 27%.  The new site offers enhanced visuals, accelerated conversion, and quicker development of new content.  LULUs ability to maintain strong in-store sales numbers while generate significant growth in from their online platform remains one of their biggest strengths.


While revenue saw 13% growth from FY16 to 17, net income wasn’t the same story.  Net income actual decreased from FY16 to FY17 while both revenue and EBIT saw growth.  This discrepancy is the result of a sharp increase in their effective tax rate.  LULU paid income taxes in FY17 of nearly double what they paid in FY16, and a 43% effective tax rate.  Nevertheless, Lululemon still managed to beat earnings expectations so there was a positive reaction surrounding the release.


LULU completed a $100M share repurchase throughout FY17 and began their $200M repurchase plan.  Of the 1.9M shares they bought back, LULU paid an average price per share of $53.85.  These initiatives help us maintain a positive outlook for LULU as management continues to signify they’re confident the price will continue to rise in the coming years.


LULU reported FY17 earnings of March 27th and after beating earnings, LULU popped 9% by the 28th.  These strong revenue and EPS numbers have since led the stock to reach a new 52-week high of $ 91.27. For the better part of 2018 Lululemon’s stock price wasn’t doing much but these earnings seem to have launched LULU out of the mid $70/ low $80 price range and towards new heights.


Past Year Performance: The past 12 months for LULU have been a steady climb.  In April of 2017, LULU traded at in the low $50s, compared to nearly $90 currently.  This 77% growth is showing no sign of slowing down either.  The stock’s price performance has been fairly stable, not showing much volatility in these past 3 months in particular, but just constant upward growth. 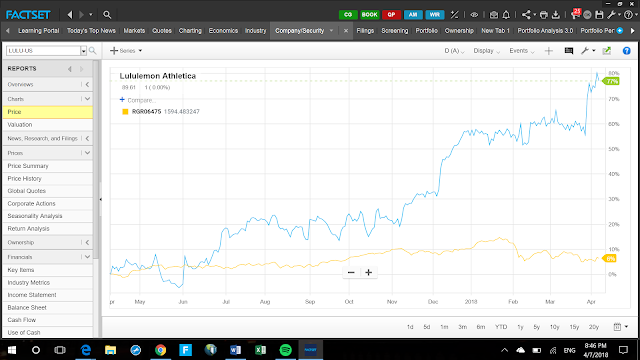 
When LULU was added to the AIM International Equity Fund in April 2016, it was trading around $65.  This nearly 40% gain over the 2-year holding period has been as a result of management’s strong ability to implement change and focus on strong growth opportunities.  LULU has continued to exceed expectations and I remain optimistic they will meet their $4B in revenue by 2020 initiative.  LULU seems to have found their footing in the American and Canadian markets but further penetration into Asia and Europe will be a key area to focus on for LULU in the coming years.  Countries outside of the US and Canada currently make up only about 10% of revenue and breaking into these other markets could prove to be pivotal in what happens to LULU in the coming years.  Key competitors like Nike, Under Armour, and Adidas already have heavier exposure to Asia and Europe, but LULU is well positioned to take away some of their market share.  Implementation and integration into international markets remain key areas that will have a profound effect on LULU’s overall performance. 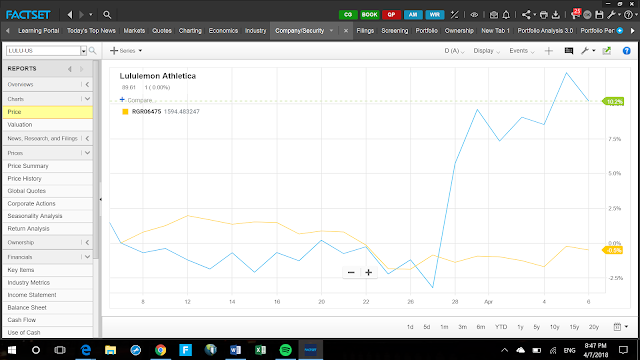 Posted by Marquette AIM at 8:13 AM