• Ollie’s aim is to provide a “treasure-hunt” shopping experience as they have something for everyone, pushing towards a universal customer appeal.   In addition to the universal appeal, Ollie’s is truly attractive for its cheap prices as they sell either overstocked or old-packaged brand name products.


• Management expects its future store potential to grow by 3.5x as its given an estimate to increase to 950 stores in the future.  They aim to take advantage of the tremendous white space opportunity and keep expanding.


• OLLI is poised for another good year as 4th quarter earnings expectations are high and management expects to keep expanding and improving their stores.


Key points: Ollie’s Bargain Outlet Holding’s Inc. first major initiative is to take advantage of its white space opportunity.  From 2011-2017, Ollie’s has proven its portability of a new store model as it entered 10 new states and opened 173 new stores.  Ollie’s stores are supported by two distribution centers in York, PA and Commerce, GA, which management believes can support 375-400 stores. 34 stores were opened in FY 17 and management expects future potential in stores to grow by 3.5x to eventually reach 950.


In addition to expanding its store locations, Ollie’s also aims to increase its offerings of great bargains as well.  It has partnerships with brands such as P&G, Kellogg’s Hasbro, and Rust-Oleum Brands.  They aim to increase buying power and their ability to buy directly from vendors.


Ollie’s main promotional slogan is “Good Stuff Cheap.”  As a retailor that buys excess of brand name products that have not been sold or repackaged, it allows customers to choose from a variety of products all across the board.  Moreover, Ollie’s culture seems to be that of a playful, relaxed culture as can be seen on their website.  The colors used are eye catching and their logo is a cartoon as well.  This is indeed to catch the customer’s attention and provide for a welcoming shopping experience.


Over the past month, OLLI has steadily risen from $55.00 to $58.70.  In the past few weeks, the stock has dropped in price a bit as it was over $60, but has come back down to its current price of $58.70.  Their Q4 earnings calls is coming up on April 4, 2018.  Earnings expectations are high, so it should be interesting to see what results are produced then. 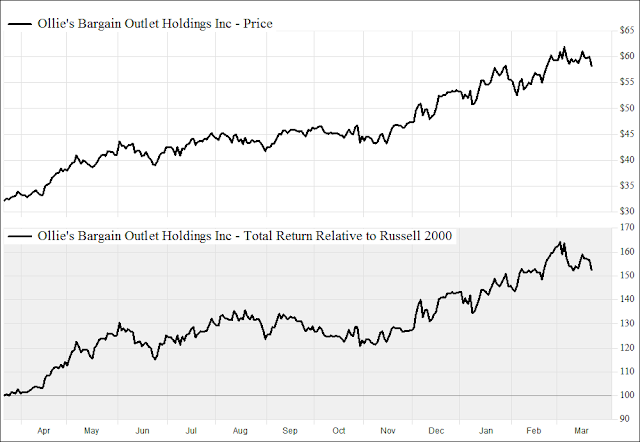 
Ollie’s Bargain Outlet Holding’s Inc. has had an outstanding year as it has grown 83%.  I really like where the company is heading in terms of store expansion and the process of acquiring more vendors.  The welcoming nature of the store also provides for a great shopping experience, which in turn should provide more traffic and therefore sales.  If Ollie’s can continue to work and expand on their successful business model thus far, I can see it being even more successful in the future.  For now, however, I recommend a hold on this position since it’s had such a great year, and expectations may be too high for this positon. 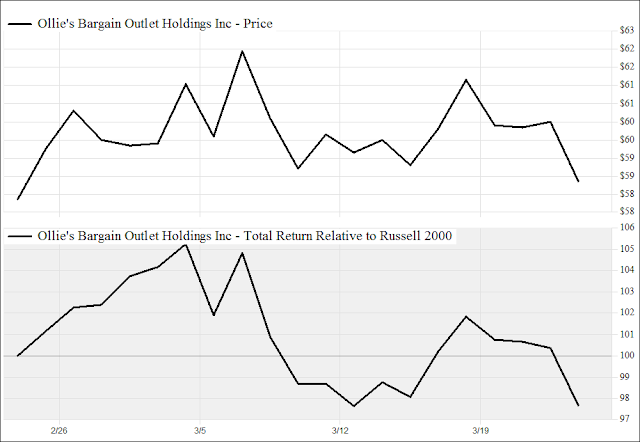 Source: FactSet
Posted by Marquette AIM at 8:10 AM