Most readers of this blog know that James A. Bianco, who is President of Bianco Research, is a former Marquette student of mine. He is one of the leading financial market observers and since 1990 he has been producing fixed income commentaries distributed to institutional portfolio managers and traders.

Jim produces unique and original insights into movements in the financial markets and has been a featured speaker at many investment conferences. He is regularly featured in the following investment publications: The Wall Street Journal, The New York Times, Barrons, US News And World Report, BusinessWeek, Forbes, Fortune, The National Review, Euromoney, and Grant's Interest Rate Observer in addition to the Dow Jones, Reuters, Knight-Ridder and Associated Press newswires. He has also written for Technical Analysis of Stocks and Commodities, Financial Trader and Futures Magazine and has appeared numerous times on CNBC, CNN, Bloomberg and Fox News. 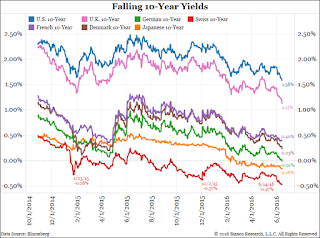 “In the seminal book  A History Of Interest Rates, Sidney Homer and Richard Sylla traced interest rates back to the fertile crescent in Mesopotamia 5,000 years ago. Nowhere in the book will you find negative interest rates (last update was 2005).

So human history has no experience with negative interest rates. No one knows how financial markets and economies are supposed to react to them. Are lower rates, even if negative, stimulative? Or when rates go negative do we enter an alternative universe where relationships change? This is our bet. All we have are guesses, most of which have not panned out. See the yen strengthening since Japan went negative on January 29. This was not the outcome that was expected.

We better start figuring out how negative rates impact traditional relationships in markets fast. As the next chart shows, we are now up to $13 trillion of negative sovereign yields.” 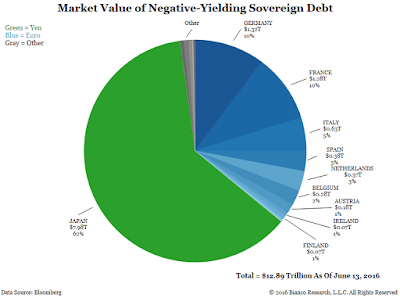