The third fund managed by the students in the Applied Investment Management (AIM) program at Marquette University is the Fixed Income Fund. This portfolio consists of a mix of fixed income exchange traded funds (ETFs) and is benchmarked to the Barclays US Aggregate Bond Index. The fund was seeded in January 2006.

As the chart above shows, the AIM Fixed Income Fund has slightly exceeded the return generated by the index over the 10+ year holding period - good performance given that the net returns (after transactions costs) are presented.

The bar chart shows the annual returns of the AIM Fund vs. the Barclays benchmark. Note that the portfolio produced positive returns each year (except in 2013). The AIM Fund generated its best relative performance during the Financial Crisis of 2008. 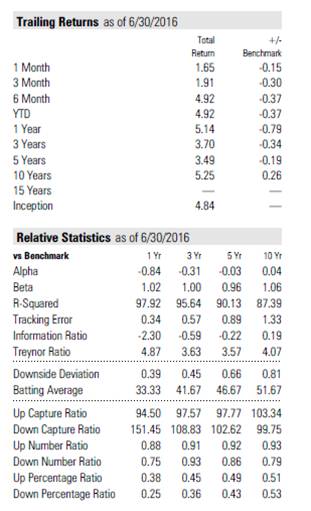 The AIM Fixed Income Fund has surpassed the benchmark by nearly 30 basis points annualized (4.84% vs. 4.58%). The table shows that the recent returns have been below the benchmark as the students maintained a 'short duration' strategy which did not perform well during the period of falling interest rates. 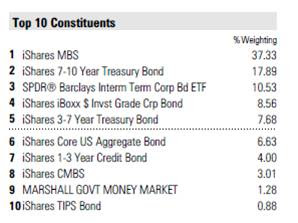 The current top 10 holdings are shown above. All of the AIM Fixed Income Fund holdings low cost are iShares ETFs. 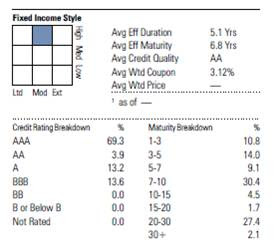 The chart above provides key statistics for the AIM Fund. The average duration of 5.1 years is slightly below the benchmark effective duration of 5.3 years. The maturity breakdown depicts a relative even schedule across time, which during the period of a flattening yield curve also reduced relative returns vs. the benchmark. The AIM Fund is high quality with virtually no non-investment grade holdings.

Mix Comparisons to the Benchmark 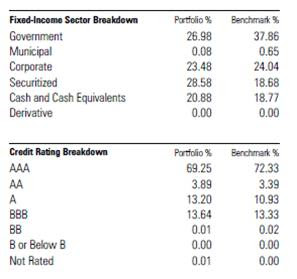 The table above shows that the AIM Fixed Income Fund has an underweight to US Treasuries and an overweight to secured fixed income securities. Given the strong performance of government securities this weighting also resulted in performance slightly below the benchmark. As mentioned previously, the portfolio is of high quality.

The final chart shows the long-term return and standard deviation of the monthly returns for the AIM Fixed Income Fund versus the Barclays US Aggregate Bond Index. The AIM Fund has generated a slightly higher return at the same level of risk as the benchmark.

The AIM students will be returning to campus in late August and will begin to make any needed adjustments to the AIM Funds. By then it will be apparent hopefully that the Federal Reserve Bank's monetary policy will be better known.