• Customers Bancorp, INC. (NYSE:CUBI) provides financial products and services such as mortgage and SBA lending for commercial, institutional, and individual clients in the United States.

• Management has announced partnerships with premier cryptocurrency and digital asset institutions such as Genesis Global Trading and SFOX.

• CUBI is currently trading at $56.68 near all-time highs of $61.48 as they’ve adapted a digital approach faster than their peers and capitalized after COVID.

Key points: Customers Bancorp, Inc. is attempting to hop on the cryptocurrency trend by creating a proprietary digital payment system that operates on the blockchain. Doing so would allow clients to always send and receive USD payments, which would benefit the clients through improved speed and security and benefits the company through low-cost deposits which can increase their margin. If customers of CUBI were to adapt this payment system, it can possibly be used by other businesses in the future.

Prior to the pandemic, CUBI had operated digitally through online checking and savings accounts. They also operated in the mortgage and commercial lending space. After COVID’s relief allowed banks to disburse PPP loans, which are government-secured forgivable loans, in response to COVID, CUBI aggressively marketed their loan services which gained them a lot of new customers as the PPP was the first time many people experienced an emergency loan program. CUBI was top 15 in terms of the amount of loans disbursed among all banks.

Customers Bancorp announced their newly added institutional clients that specialize in digital asset classes and cryptocurrency investment. Customer Bancorp wants to specialize in business-to-business payment options for commercial real estate, healthcare, insurance, and more areas in which these clients part take in. Head of digital banking at CUBI believes the number of cryptocurrency clients will increase over the next few years and these clients are ready to embrace it. As we’ve seen this last year, cryptocurrencies are becoming more relevant, and companies are beginning to adopt them as payment methods and investments. By investing in the cryptocurrency space early, CUBI is able to get ahead of their customers as they are more poised for future growth.

CUBI has readily adapted to the environment that is being digitalized around us. Cryptocurrency is a trending topic and using a proprietary digital payment system using the blockchain will allow the company to expand their margins while benefiting their customers. For these reasons, CUBI has recently reached a new all time high of $61 before trading at $56.68 as of 12/1 close.

Since the March 2020 lows, CUBI has rallied from $8.90 to its current near all time high price of $56.68. This can be contributed to PPP loans along with providing digital services as people adapted to COVID. The government distributed nearly $1.8 trillion in PPP loans with CUBI taking advantage of the opportunity. Over the last year, CUBI has seen steady gains with a recent positive catalyst due to their third quarter earnings. Investors have recently let the stock consolidate in the range of $56-61 as there have been no new updates in operations. Because the stock is hovering near highs, it will take time for investors to decide whether the stock should go higher or not.

Past Year Performance: CUBI has increased 218.61% in value over the past year, however the stock is still under its relative value to competitors. While CUBI operates at a PE ratio of 7.42, its competitors are operating near a 10.46x price to earnings. CUBI has shown investors they are looking to improve their value through investment in the future. CUBI (blue line) has deservedly outperformed the Russell 2000 index (purple line) by a very fair amount. The past year has shown great strength in the direction CUBI is headed, and if they continue to invest in the future they will continue to outperform the broader market. 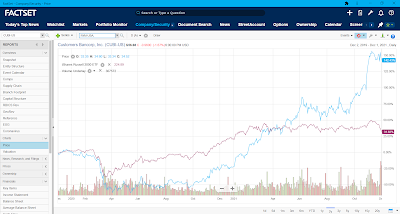 CUBI’s head of digital banking is willing to invest in growing spaces and take advantage of them as well. I think that the addition of their cryptocurrency clients show investors they ae not a traditional bank and are following the fast paced environment we’re in. While their stock has increased a great amount since its COVID lows of below $9, I think the fact that they still have a low relative PE ratio justifies a further increase in their stock price. 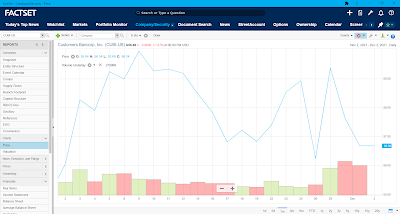