Key points: Right on the heels to the UN Climate Change conference, SSE plc made major commitments to increase their spending on renewable investments. The company announced their Zero Net Acceleration Program with the goal of leading the transition to renewable energy. The company plans to increase their spending by £1 billion a year, making their total capital expenditure investment amount to 12.5 billion. This new investment coincides with COP26’s target of 1.5° Celsius for the energy sector. This goal would have global emissions stop at a 1.5° Celsius limit. The conference called for countries to strengthen their commitments to renewable energy, and SSE plc is helping do just that for Britain.

The company has also announced a plan to optimize the allocation of capital between regulated and unregulated business. Through selling a minority interest in their transmission and distribution business and a new dividend plan, they will be able to expand and meet their energy goals proposed in the Zero Net Acceleration Program. The investment and sale are also in part a response to activist investment firm Elliot Management. The firm was pushing for the company to fully spin off their renewable segment of business. However, SSE plc is a key part in the United Kingdom’s targets made at the conference and they are well positioned to help achieve these goals. On top of the commitments made at COP26, the scarcity of gas in the UK has electricity prices soaring, increasing the demand for a green alternative. 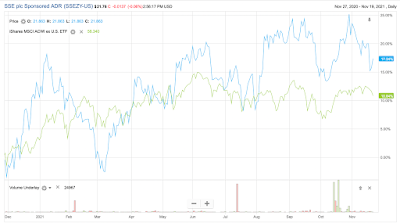 SSE plc is well positioned for the future. Their recent announcement of their investments in renewable technology is exciting for the UK and shareholders alike. Their announced Net Zero Acceleration Program promises enhanced growth through 2026. These programs and investments combat many of the risks associated with the business that were in play when the stock was added to the portfolio. The company’s capital commitment to growing their renewable business segments combat the possibility of energy infrastructure failure as well as solidify their political and societal standing as a green energy player. Aside from the placation of risks, the drivers for the company are intact and beginning to yield results.  I am excited to see how the company innovates and growths in the next five years and beyond. 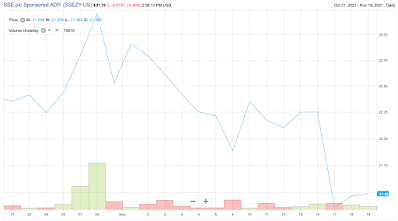 Source: FactSet
Posted by Marquette AIM at 8:29 AM