Disclosure: This article was written by myself, and it expresses my own opinions. I am not receiving compensation for it, and I have no business relationship with any company whose stock is mentioned in this article.

SAGE is advancing a portfolio of clinical programs featuring internally discovered novel chemical entities with the potential to become differentiated products designed to improve brain health. SAGE is currently in phase 3 of FDA testing for a new antidepressant called ‘Zuranolone’. SAGE recently announced their plan to submit a New Drug Application (NDA) to the FDA for Zuranolone in the second half of 2022. The initial submission package will seek approval of Zuranolone for postpartum depression is anticipated in the first half of 2023.

Greene is in the process also of the creation of a new compound in the neurology indication called SAGE-324. This indication would help with essential tremors and Parkinson’s disease. Although there is only one Parkinson drug in the market, it does not compare with what SAGE Therapeutics as the company wants to provide an indication for essential tremors as well.

SAGE Therapeutics took a huge hit March 1st, right at the height of the pandemic and the market shut down. SAGE Therapeutics has been fluctuating these past few months because of the constant trials and testing. However, from October to November, there has been an 11.47% growth. Due to SAGE Therapeutics being a newer established company, they give out no dividends as of now.

Over the past 12 months, SAGE has decreased 1.87% compared with the Russell 2000. Additionally, SAGE has seen a -44.60% change over the year due to the extra spending on the new drug patents and collaboration with the FDA. The amount for the second quarter of 2021 reflects an increase in expenses of $13.0 million and a reduction in expenses of $20.1 million due to reimbursement from Biogen pursuant to the Sage/Biogen Collaboration and License Agreement for the new antidepressant. The reasons for the increase in expenses were clinical pharmacology studies that began in 2021 and non-cash stock-based compensation expense. 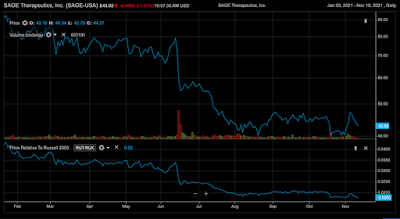 Each year, mental health is taken more seriously. Even though the pandemic, the harsh trails of the FDA, and creating a license for this new antidepressant has decreased the revenue, there is a lot of potential. This is so because the new Zuranolone is the first antidepressant with an indication for postpartum depression. If SAGE can get this approved by the FDA, SAGE would create a moat for themselves in which no other company can compete with the new antidepressant on the market. My recommendation would be to buy low and then hold it until 2022/2023 when they can get through their third trail of testing and finally market this new antidepressant. 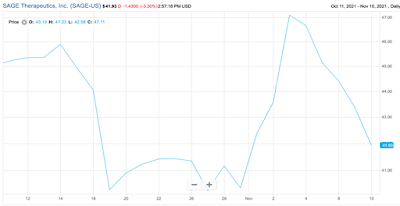