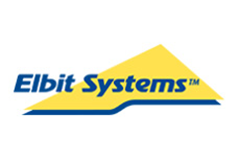 Key points: Elbit Systems Ltd. remains ‘in play’. While ESLT saw little movement during Q1 and Q2, the company began to pick up speed in the beginning of the third quarter. Currently, ESLT stands at $155.10 per share, which is approximately up 13% from its addition to the fund. For Q2 of 2021, ESLT reported a $0.27 increase in EPS (originally $2.03) representing a 13.3% increase. Also, second quarter revenues were up $1.3 billion (21% YOY), in which management stated to be organic.

In addition to favorable impacts of the contract, ESLT will be adding a 5th  facility in the U.S located in North Charleston, South Carolina. According to the management team, the facility is expected to be operational by fall 2022. With the opening of the facility, ESLT will be able to increase their engineering and manufacturing capabilities in the U.S, which ultimately will strengthen Americas military. Moreover, the project will have the ability to add hundreds of new jobs to the Charleston county.

With the successful growth into new parts of the world, ESLT is also looking to upgrade its older facilities in Israel with power generation and energy storage units. These additions to the facilities will not only lower emission energy sources, but also improve its energy consumption. These steps taken by the company will expand its efforts in reducing its carbon footprint.

Since ESLT released news of its contract with the Royal Navy, the stocks shares are up roughly 4%. Having seen little movement in Q1 and Q2, this is just the catalyst ESLT needed in order to give it some life. In fact, the company’s share price is nearing all-time highs at $166.91. 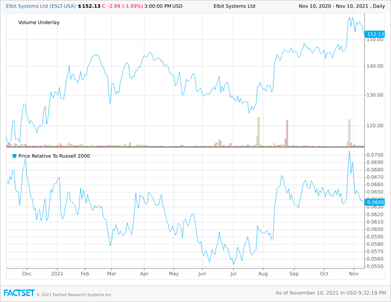 Elbit System’s success in landing a $100 million contract with Babcock International Group has driven its price share and exceeded shareholders expectations. The announcement of the company’s expansion into North Charleston, South Carolina great news as it aligns with the company’s continual growth strategy. Also, with the addition of new energy generation and power storage units in older facilities in Israel, ESLT is in a perfect position to capitalize and grow as it its nearing its all-time high of $166.77. It is recommended that the AIM international fund continue to hold Elbit Systems. 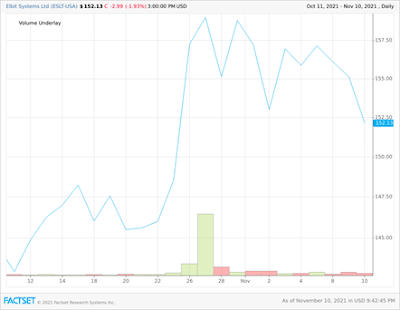