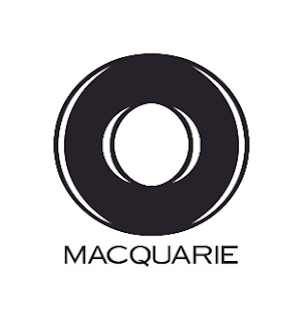 Disclosure: The AIM Equity Fund currently holds this position. This article was written by myself, and it expresses my own opinions. I am not receiving compensation, and I have no business relationship with any company whose stock is mentioned in this article.

• Macquarie Group Limited (ASX:MQG) engages in the provision of banking, financial, advisory, investment, and fund management services. $MQG operates globally with most of its revenue obtained from Asia/Pacific and North America.

• Australia’s largest investment bank is known for investing in energy and infrastructure technologies that empower innovation for a better future. The green investment team at MQG has paired up with France’s Engie and U.S. energy company Fluence to build an energy storage facility in Australia.

• Share price for MQG has fallen 7% since the news leaked resulting in a drop from all-time highs. This price action presents a potential buying opportunity for investors.

Key points: Macquarie Group Ltd. Is in a predicament where once a company of stable growth now faces the difficulty of finding the next steps to fix a decade old problem. Australia’s largest investment bank is facing backlash over an $80 billion dividend scandal from a German tax scheme.

According to tax authorities it appeared as though there were two simultaneous owners of shares that did not have dividend rights. Even foreign investors were eligible to claim tax reimbursements on shares that they did not own. Macquarie’s involvement in the scheme in October 2010, included lending money to increase the volume of such trades. The proposal provided hundreds of millions to overseas funds and in return MQG would receive up to $30 million for each lending agreement. It is expected that MQG will take action to make these wrongs right and it is estimated that the investment bank has paid back $150 million to the German government since the loophole removal. However, this may pose a buying opportunity if Macquarie is able to address the situation effectively and in a swift manner.

In addition to the discounted stock price from legal issues, the battery storage project poses strong upside for Macquarie that might just cancel out the tax scandal. Macquarie is working with Engie, a commercial electricity provider, and Fluence, the global leading energy storage technology provider. This exciting venture known as the Hazelwood project will be able to store and deliver 150 megawatt-hours of energy with potential to expand to 1600 MW and supposedly costing less than $107 million. This project will assist in providing back-up power when needed during heatwaves and unexpected power outages. The project has an expected completion date of November 2022.

Since news of this scandal surfaced on November 23, 2021, Macquarie’s stock price has dropped over 7%. Prior to the news break, MQG was trading at all-time highs at around $150 per share and had a ~40% return since the beginning of the fiscal year.

Past Year Performance: MQG has increased over 40% in value over the past year, but since the scandal release the stock is a bargain for the near-term future. It’s times like these in a growth stock’s life that give the investor the opportunity to buy shares at a discount with the expectation that circumstances will return to normal. The German tax scandal that Macquarie Group Limited has been a part of is a failure in management to foresee the consequences of their actions and a lack of concern from lawyers who consulted with MQG. Had the lawyers not brushed the tax loophole under the table Macquarie would have not been in the position that it is in. The negativity surrounding this will impact MQG’s future operations for several years to come. However, this can be a good thing, if Macquarie is more cautious and learns from its mistakes then the issue will not happen again. Presumably this will allow the stock price to return to its normal growth rates.

In addition, the green investment arm of Macquarie is making significant headway in making clean technology more feasible for consumers and promoting a greener future. If this project is completed by the expected date and operates to its potential, there is possibility for strong upside in stock price. Furthermore, Macquarie’s long-term vision and focusing on funding for high rated ESG company’s shows promise for future projects the bank may take on in the future. Based on the price drop from the incident Macquarie is priced at a discount and the environmentally beneficial projects that it is investing in I give MQG a buy rating. It is the perfect opportunity to purchase shares of a growing company at a discount. 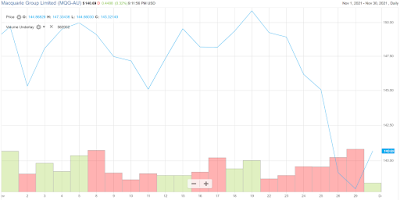