•  SUPN is expected by Wall Street to have declining earning and lower revenues. This is based on the results of their third-quarter reports.

• Some drivers that will help combat a significant decrease in earnings are the proprietary technology platforms, intellectual property and exclusivity, and projected acquisition of competing pharmaceutical company, Adamas Pharmaceuticals.

Key points: Famous actress, Holly Robinson Peete has partnered with Supernus Pharmaceuticals to help raise awareness about Attention-deficit/Hyperactivity disorder and neurodiversity during (ADHD) month. Peete has shared her journey about her personal experiences with ADHD because of her daughter, Ryan who was diagnosed.

With the partnership with Peete as well as the deal of acquiring Adamas Pharmaceutical, SUPN is positioning itself to appeal to a wider base of patients and end-users.

The acquisition of Adamas Pharmaceuticals will allow Supernus to build a strong and diversified portfolio of value-enhancing and clinically differentiated medicines targeted to combat central nervous system diseases.

The company has established a reputation for strong commercial execution and is forecasting strong performance with access to Adamas’ innovative therapies which will benefit their already existing and growing patient base.

What has the stock done lately? As of Thursday, October 28, the stock is up 17.63% year to date. The company has outperformed the S&P 500 index on average over the past two years; however, the company’s performance has followed closely with that of the S&P small-cap healthcare index. 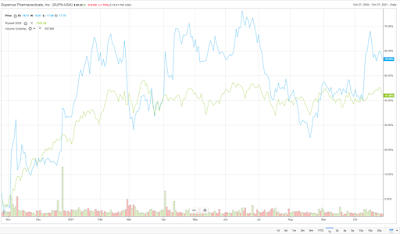 With the acquisition planning to take place and the partnership with Holly Robinson Peete as an advocate for the company, Supernus Pharmaceuaticals, Inc. has undoubtedly put itself in a position to generate impressive long-term growth and revenues if they continue to innovate and maintain a strong position in the health technology and pharmaceutical markets. These markets are fast-paced and pivot quickly so it is possible the acquisition might leave the company with a blind spot, where they are focusing too much on their acquisition rather than investing in R&D within their own company. Making note of this, the acquisition still places them in an appealing position within their market, allowing them more access to greater amounts of resources and supplier relations. 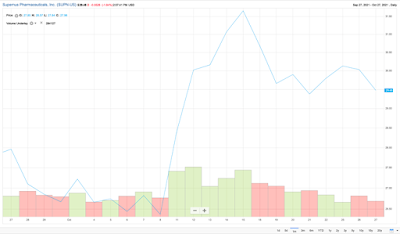