•Uniti Group Inc (NASDAQ: UNIT) is a real estate investment trust (REIT) focused around infrastructure in the communications industry. The company operates through 5 segments: Leasing, Fiber Infrastructure, Towers, Consumer CLEC, and Corporate. The company is entering their 8th year of business and was founded in February 2014. Uniti Group is headquartered in Little Rock, Arkansas and is led by President, CEO, and Director Kenny Gunderman.

Recently, no major acquisitions have been announced, however a reported acquisition and takeover of Uniti and Windstream has been discussed and reached negotiation stages before stalling. Zayo Group LLC, which is owned by the digital infrastructure firm Digital Bridge Group Inc and private equity firm EQT, was looking to acquire Uniti for ~$3.5 billion, or ~$15 per share. Discussions began in June of 2021, and it has appeared to have stalled in the later stages of October.

The interest in acquiring Uniti Group and Windstream by private equity and hedge funds can be seen as a positive. Although Uniti and Windstream carry considerable amounts of debt (around $7 billion total), discussion of an acquisition indicates the growth potential of Uniti in the industry going forward.

Finally, the official pitch had dividend commitment as a driver. While Uniti has remained constant in payment and seen slight increases in growth, the firm has seen a decrease in dividend payment since previous 5-year marks. With increased debt levels, a stipulation in the governing of their notes prohibits them from paying cash dividends in excess of 90% of the firm’s REIT taxable income without consideration for the shareholder.

The firm has seen growth through strong market share positioning in a relatively growing industry. The demand for infrastructure for the 5G is strong, and Uniti has enough market share to capitalize on this. No new major acquisitions have taken place, however the negotiations between Uniti Group and Zayo Group LLC helped fuel a 18.98% rally for UNIT share price. The company continued with their issuance of a $0.15 cash dividend.

Past Year Performance: Uniti Group Inc has seen rapid growth in share price over the past year, seeing a 43.89% YoY growth. As of earnings reported for Q3 on November 4th, the firm has seen their leverage ratio decrease to 5.76x based on Net Debt to Annualized Adjusted EBITDA. The firm also had $266.7 million in consolidated revenues and an AFFO of $0.43 per diluted common share, an increase of 19% YoY to Q3 2020. 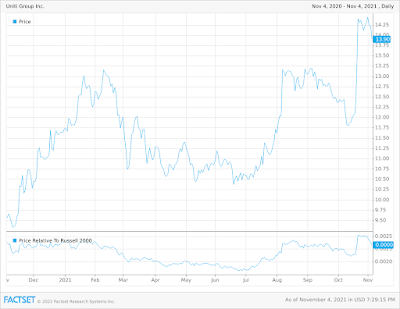 Since the settlement of the Windstream bankruptcy situation, Uniti Group has seen growth and a new start. Windstream continues to provide most of the Uniti’s revenue (~70%) while remaining stable in industry market share. Uniti Group is failing to reduce their dependence upon Windstream from a total % of their revenue, however management is confident that this is feasible and achievable. The firm’s negotiations and discussions with being sold to Zayo brought increased attention and retail investor support. Due to these factors, Uniti Group Inc. remains a hold inside of the AIM Small Cap Portfolio. 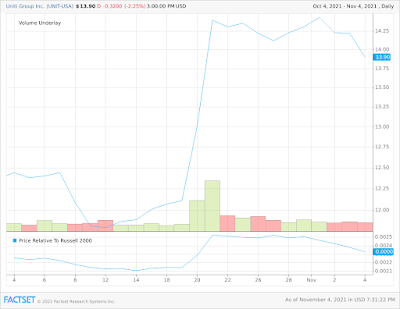