In this current investment climate, it is hard to predict the future. Investment diversification is crucial in such chaotic times in order to mitigate risk. With weak stock performance to start the year (S&P down more than 11% ytd), and uncertainty going forward, diversification is all the more important.

Therefore, bonds should be considered as they can still generate a positive return even in weak economic times. In consideration of the overall economy, many companies have been put on hold amidst stay at home orders and a nation-wide quarantine. As a result, companies have been forced to obtain debt to cover their expenses while their revenues have decreased. This has led to a larger supply of debt securities and has opened up increased buying opportunities for investors, leading to a buyers’ market with larger than usual yields given the lack of demand.

Furthermore, the Federal Reserve recently has been contributing by not only buying risk free assets but now corporate and even junk bonds! This has had the effect of lowering bond liquidity risk and possibly credit risk should the government continue to buy lower credit bonds in the case of default. The Federal Reserve’s intervention has made debt yields more lucrative than usual. Thus, now is the time to consider increased bond exposure - particularly core bonds.

With the decline of the US stock market and the uncertainty of when business will go back to normal it is more important than ever to remain diversified. It is critical to know that core aggregate bonds, which are US investment grade bonds, are incredibly useful for when the stock market drops (See chart below obtained from Barclays).

With many bonds having already fallen off from investment grade status, the credit risk is not the same as it was before the coronavirus health crisis and should others fall the Federal Reserve is helping to mitigate some of the loss here. Thus, while the credit risk profile of companies in general has increased, the Federal Reserve is now stepping into help as bonds have sold off leading to more attractive discounted bond prices.

It is also important to consider that if one is leery of core bond risk, two of the main alternatives are treasuries and high yield debt. With treasuries trading well below 1% yield and high yield debt companies not being able to operate and having already been just barely getting by, the risk has increased in high yield investment. As a result, core bonds easily stand out as a better option in my opinion. The chart below shows recent stock weakness against the benefits of core bonds.

These events show the core bond market can continue to make a profit even in weak economic times which can help an investor hedge their portfolio by smoothing out investment returns caused by owning a heavy concentration in stock. Given the ability for core bonds to still make a return even in weak times, it makes sense to include them in one’s portfolio. 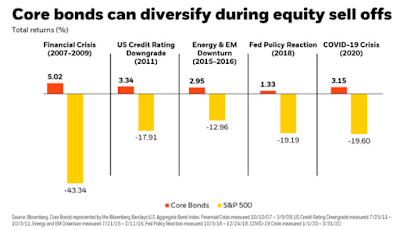 As mentioned, the slowing of the world economy has notably hurt many businesses. Specifically, industries such as travel, entertainment, restaurants, etc. have been hit the hardest.

With the pause on the economy and the lack of revenues coming in, companies in general, particularly those in the previously mentioned industries, have had to bring in increased debt to stay afloat. One example in particular is Carnival (CCL), an international cruise line, which recently offered $4 billion in bond offerings with a 12.5% coupon to draw in investors.

With 12.5% coupons being offered by these higher risk companies who are unable to operate during this time, these bonds will likely provide large returns on invested capital assuming these companies stay solvent. Even if these companies face financing issues, collateral could make a difference. CCL for example still has $28 billion worth of ships and other assets which would be used as collateral in the case of bankruptcy according to the Financial Times. Thus, these types of returns seem very lucrative, so much so that CCL has had an overflow of orders. There are several other distressed companies that will likely make similar offers. Investing a higher allocation of one’s portfolio here would make a lot of sense.

Before the corona pandemic, the Barclays’s aggregate bond index, which is a commonly used fixed income benchmark among others, had steadily increased BBB+ exposure as interest rates were low and additional return could be gained by increasing the indexes risk profile (see figure below obtained from American Century Investments). This sacrifice for yield though increased the risk for credit default.

With the American economy being slowed by the coronavirus, more and more bonds could lose their investment grade status. Which would obviously impact the return on bonds negatively so this risk should not be ignored. But the point remains for quality businesses, investors should add risk to their fixed income allocation as businesses' need for cash is more important than ever to stay afloat. Now is the time to increase investment grade bond exposure as others avoid it in fear of bond default - especially now with the Federal Reserve currently buying higher risk bonds. With treasury rates close to zero there is only more incentive to add bond risk. The Federal Reserve has noticed a lack of bond investment and has begun buying lower credit bonds which should enhance bond returns and even lower overall bond risk. 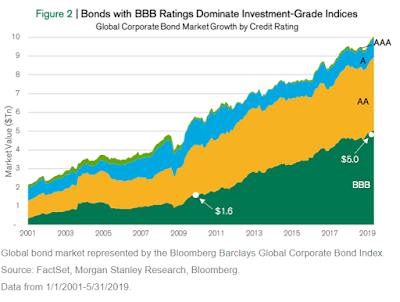 The rise in lower credit quality bonds in the Barclays index led to Federal Reserve action as many companies that were previously investment grade could potentially go out of business due to the pandemic.

According to MarketWatch, the Federal Reserve plans to buy $750 million in corporate bonds with investment grades of at least BBB-/Baa3 (minimum investment grade ratings of Standard & Poor’s and Moody’s).

Additionally, the Federal Reserve plans to purchase recently downgraded bonds from investment grade ratings as of March 22 or later that are now rated at least BB-/Ba3. The Federal Reserve intends to do so via exchange traded funds with the investment objective of exposure to US high-yield corporate bonds. This should enable investors to feel less pain in their bond allocations as the Federal Reserve takes unprecedented action to lower overall bond risk making fixed income a better option than usual in my opinion.

To conclude, this current investment climate is clearly uncertain and given the returns of bonds in weak economic times, they are a worthy portfolio addition. With a wider selection of bonds to choose from backed by collateral and the Federal Reserve, now is the time to consider adding bond risk. This has led to outsized spreads as companies like CCL offer 12.5% coupons versus the near zero treasury return. Thus, now is the time to consider increased bond exposure.