• SSTI’s revenues have held up well during the COVID-19 pandemic and as of June 30, 2020 their revenues had increased 6 months ended YoY by 9%.

• SSTI will look to boost revenues with existing customers through their ShotSpotter Missions solution improving visualization and crime forecasting/analysis.

• In late September SSTI’s CFO Alan Stewart took a medical leave of absence and has been temporarily replaced by Mary Hentges who is serving as the interim CFO as of October 26.

Key points: ShotSpotter, Inc. has performed well during the past year since they have increased revenues and boosted profit margins. From their Q2 2020 performance, it was evident their business was not severely disrupted by the COVID-19 pandemic with many of their client’s government entities. During Q2 2020, SSTI saw 6 months ended YoY revenue growth of 9% despite pandemic adversity for much of the quarter. Their revenues were primarily generated from their ShotSpotter Flex solution (96% of total revenues) which comes from the 109 cities they serve.

SSTI’s management remains concerned about new domestic growth opportunities in city markets where entities have suffered from significant budget shortfalls. Furthermore, SSTI’s revenue dependence on cities will hurt their business should cities begin devoting less funding to police forces in the years ahead. In addition, Management is concerned about the inability to grow their international presence as the pandemic persists making it increasingly difficult to penetrate those markets.

During September, SSTI attended the Gateway Conference virtually in San Francisco where they reiterated some of their long-term strategic growth initiatives. One of the key takeaways from the conference was SSTI continued belief in their platforms and intentions to actively deploy their solutions to more universities and colleges which represent a $250M TAM.

SSTI’s stock price has decreased in the past month by 5.6% and had been performing well up 3.6% until October 26 when the stock had fallen with the broader market. During the past 3 months, SSTI had increased 24% and has had minimal fluctuations since the sharp increase in early August when they crushed Q2 earnings.

Past Year Performance: SSTI has increased 44.28% in value during the past year. SSTI’s strong Q2 results have benefitted them immensely as investors feel increasingly more confident about the businesses ability to endure the pandemic’s adversity. 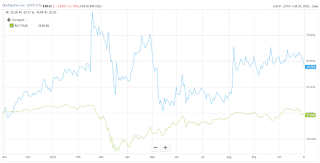 ShotSpotter has been a strong performer and addition to the AIM portfolio since it was originally added in March of 2018 with a price target of $27.00. Many of ShotSpotter’s existing customers have suffered disruption due to the pandemic and it will continue to hurt SSTI with growing revenues in cities. In addition, revenues are expected to be between $43.5-45.5 million for 2020 which represents a much lower YoY increase against how they have performed during the past 5 years. Given the investment thesis has largely played out in revolutionizing safety and policing through technology, it is recommended SSTI’s stake either be trimmed or sold from the portfolio. 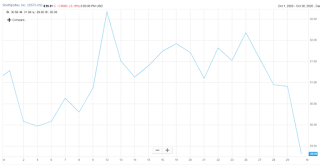 Posted by Marquette AIM at 7:10 PM